Blockchain Revolution Series: WEF To Give Blueprint For Decentralised Economy

Cryptocurrency Derivatives Series: Spotlight On FxWirePro’s BTC Long Hedges As Bitcoin On Verge Of $10k Trajectory Ahead Of Block-Halving

Bitcoin halving Q&A: what it's all about and what it means for the cryptocurrency

FxWirePro: Quick Run Through On EUR/USD Risk Reversals, Skews And Options Trading Strategy Ahead of ECB

According to Goldman Sachs, cryptocurrencies do not generate cash flow or earnings

Can Bitcoin Moon-shot In Tandem With Covid-19 Speed As US Congress Mulls Over Digital Dollar Stimulus Package? 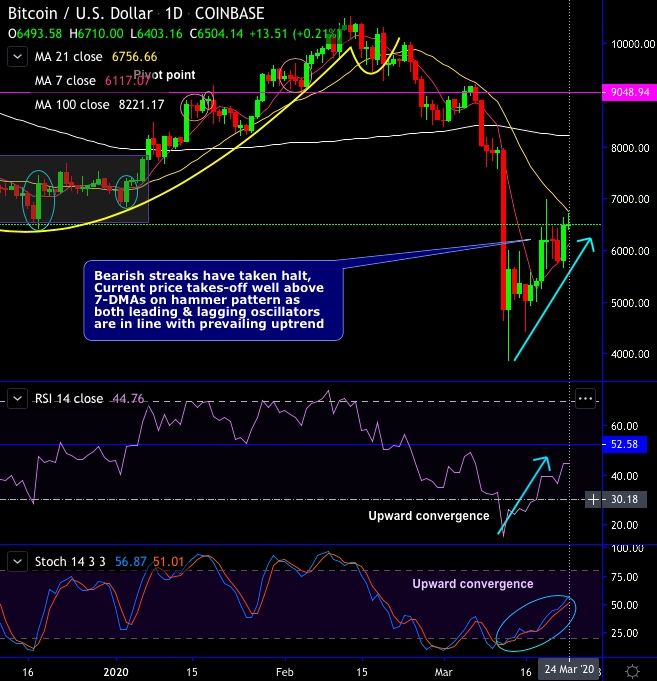 The deadly contagious ‘coronavirus’ has transformed almost everything very swiftly. During such a disastrous circumstance, if the pioneer cryptocurrency ‘bitcoin’ has upside traction to make a moon-shot, it should quickly move in sync with the contagion’s speed.

As you could observe the above charts, while almost all asset classes have struggled during this struggling phase, bitcoin has been showing resistance to the bearish streaks and stabilizing its price.

The bearish streaks of cryptocurrency markets in recent times now seem to have taken a halt.

Bitcoin price (BTCUSD) tumbled from the highs of $10.5k levels in February to the current level of $5.2k levels and breached below psychologically important $5k mark, it is now looking to be stabilized and in fact, the price started sensing support at $4,419 levels and bouncing through the $5,500 levels confirming the mild bullish sentiment in the crypto markets. (BTCUSD) is stabilizing and began oscillating between $4k - $6k levels (refer 2nd chart).

Today, the pioneer and world’s largest cryptocurrency, Bitcoin’s price (at Coinbase) has managed to break out the $6.5k level briefly, rallying from $5,688 to a daily high at $6,710, but 21-DMA is capping this rally (refer daily chart). While in a draft of the legislation by the Democrats in the United States House of Representatives propagating and proposes the creation of digital wallets for U.S. citizens to be maintained by the Federal Reserve within a section are considered for “Direct Stimulus Payments for Families” who has earning below $75,000 per annum, are likely to be entitled $2k monthly.

The proposed legislation appear to stimulate the U.S. economy during the coronavirus pandemic includes a recommendation to create a digital dollar.

While bitcoin is also confronting the deadly bearish threats of analysts owing to pandemic disaster, by holding above the $5,400 support and currently the price continues to show stabilized strength in the brink of slumping equities and other commodity ques. Please be noted that WTI crude price has tumbled to the 18-years lows, while Dow Jones (DJI) has plummeted to 3-years lows, so is the case with the other equities ques across the globe. Gold is shining but exhausted bulls are troubling at 88.6% Fibonacci levels from the December’2015 lows. Contemplating all these scenarios, Bitcoin was incepted (during last financial crisis in 2008) and meant exclusively for the circumstances during such ‘financial crunch’, and so far it’s been functioning quite well as desired. Hence, hopefully, this seems to be the conducive time for the pioneer cryptocurrency (BTC) to hold further resistance to the losing streaks and spike off in days to come when the dust of pandemic situation settles.