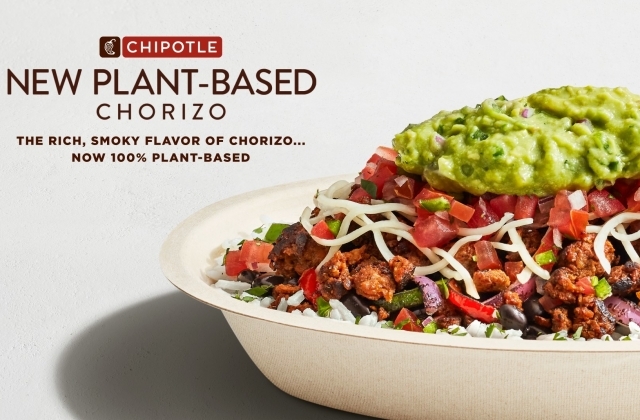 Chipotle Mexican Grill starts off the new year with the introduction of a new plant-based item. The restaurant chain unveiled its "meatless" chorizo that customers can now find on the menu.

According to CNBC, Chipotle's plant-based chorizo is the very first vegan option that it has launched since 2014 when it released sofritas. Customers can place orders for food items with the restaurant's new chorizo starting Monday, Jan. 3. This is available in all of Chipotle's locations across the United States.

The new "meatless" option is certified vegan and it was made with pea protein, tomato paste, Spanish smoked paprika, garlic, chipotle peppers, and healthy olive oil. Every 4-ounce serving of the Chipotle plant-Based Chorizo has 16 grams of protein and they do not have gluten, preservatives, grains, artificial flavors, and artificial colors. Prior to its release, Chipotle tested this plant-based chorizo in August and they were sold in Indianapolis and Denver at that time.

In any case, it was noted that since Brian Niccol took over Chipotle as chief executive officer, the company stepped up its game by adding foods to the menu. The process of adding new items were said to have been called the "Stage-gate testing."

It was observed that Chipotle's new food releases have all been strategic to drive customer traffic. For instance, it has offered the new menu but for a limited time only thus people are rushing to the stores to buy them before they are gone. Also, the foods are being offered for a short time only so keep them always fresh and people will not get tired of them.

"We are thrilled to introduce guests to our new, flavor-packed Plant-Based Chorizo during a season when healthier options are top of mind," Chipotle's chief marketing officer, Chris Brandt, said in a press release. "Plant-Based Chorizo is our best chorizo ever and proves that you don't have to sacrifice flavor to enjoy a vegan or vegetarian protein."

Meanwhile, as shared on USA Today, customers can order the following items with the plant-based chorizo through Chipotle's website and app: Whole30 Salad Bowl, Vegetarian Bowl, and the Vegan Bowl. All of these are part of Chipotle's new lifestyle bowls menu list.