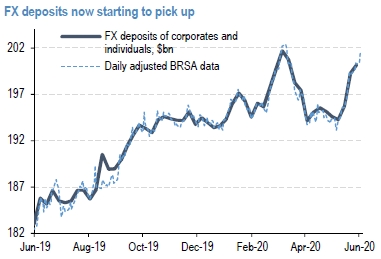 Today’s Turkish central bank’s monetary policy hasn’t been driving force for lira. CBT maintained status quo policy by keeping its benchmark one-week repo at 8.25 percent as widely expected, this was the unanimous expectation in the market that CBT would leave its benchmark rate on hold at 8.25%. In a fundamental sense, there is no rationale for cutting rates at this time: the economy is pulling out of its corona dive; activity remains well below normal level, but is, at least, improving month-on-month in most sectors. Inflation, on the other hand, shows no sign of moderating – the noticeable acceleration in core inflation during June led the central bank to suspend its hitherto uninterrupted rate cutting cycle; at the time.

After the country's headline inflation rate hit the highest level for 10 months in June boosted by a surge in food inflation due to seasonal and pandemic-related effects, while commodity prices continued to restrain consumer prices. Policymakers said that demand-driven disinflationary effects will become more prevalent in the second half of the year as the normalization process continues, while the economic recovery will continue helped by recent monetary and fiscal measures.

CBT even acknowledged that cumulative lira depreciation was the reason behind this inflation acceleration, an assessment we absolutely concur with. This fundamental factor has not reversed since – the only thing which has changed significantly is that the economy needs less emergency support, not more – hence, it makes sense to expect that rates will not be cut right away.

We, however, expect further rate cuts down the road – in fact, the central bank governor too has conceded that rates will be cut again during H2 when inflation begins to moderate. We do not forecast inflation to moderate to anywhere near CBT’s projections; but besides fundamental improvement, there could be other forces which kickstart another easing cycle – the main one being pressure from President Tayyip Erdogan. If economic activity were to remain subpar in coming months, instead of rebounding powerfully back to year ago levels or better, Erdogan will very likely pressure the central bank once again. This is the scenario we find more likely and, at the same time, concerning from the viewpoint of the lira exchange rate.

In TRY, we stay UW and added a 6-month USDTRY forward as we reckon BoP pressures are likely to prove key for lira’s outlook. Short-term external debt repayment needs remain high, although admittedly the rollover schedule is lighter over July-September. Portfolio outflows have reached $10.3bn YTD (see here) and while a recovery in global risk appetite is likely to slow non-resident selling, we believe portfolio flows are likely to remain subdued. Dollarization now appears to be picking up (refer above chart).

Finally, our economist forecasts a 0.8% GDP current account deficit in 2020. Given the better than expected growth performance and the high credit growth risks are for a larger deficit.