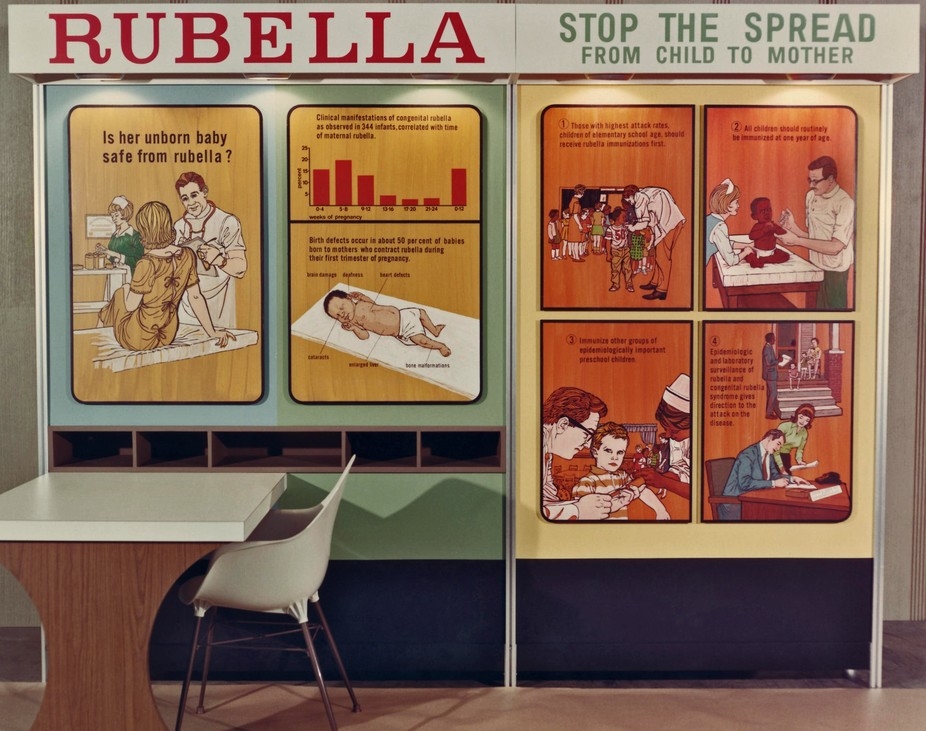 A display used to educate the public on rubella vaccination and the mother-to-fetus transmission of this virus. Centers for Disease Control and Prevention via Public Health Image Library 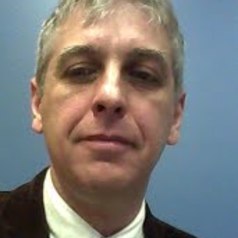 Just over 50 years ago, a highly contagious but seemingly harmless virus swept through the United States, infecting as many as 12.5 million people. In both adults and children, the virus presented as a mild illness, but caused birth defects in some babies born to women who were infected while pregnant.

Does this sound familiar? Though separated by time and place, there are surprising similarities in the social issues raised by the rubella outbreak of 1964-65 and the recent Zika outbreak in South America.

Both viruses can cause birth defects, a fact that ties them to social issues surrounding pregnancy, women’s health and the politics of abortion.

The rubella epidemic, with an estimated 20,000 affected newborns, changed medical and public consciousness about the virus. Some have recently argued that it even changed ideas about abortion.

As a sociologist who studies medicine and science, I am interested in understanding the narratives we develop about disease. I examined the rubella outbreak in my 2008 book, “The Vaccine Narrative,” and how perceptions of the disease interacted with stories about vaccination.

Unlike other vaccines, the rubella vaccine conferred no direct benefits to recipients. Instead, it promised to prevent possible future birth defects and to reduce rubella-related abortions; for rubella vaccine, the health of the woman mattered almost entirely in terms of her status as a potential mother.

In the spring of 1964, doctors in North America confirmed that the deafness and blinding cataracts they found in massive numbers of children had been caused by rubella.

Before the this outbreak, rubella was obscure, but not unknown. Unlike Zika, which is primarily transmitted by mosquitoes, rubella can spread through casual contact. In fact it was was endemic in Western populations, with more than 80 percent of the population exposed to the disease before rubella vaccination was introduced in 1969.

Health professionals had known since 1943 that rubella sometimes caused birth defects, called Congenital Rubella Syndrome (CRS). In another parallel with Zika, people infected with rubella are often asymptomatic. Even when people do have symptoms, they are fairly mild.

Researchers isolated the rubella virus only in 1962, and there was no blood test until 1965.

Before the blood test was available, a doctor’s clinical diagnosis of rubella could access a medical exception to the ban on abortions that existed in most states, called a “therapeutic abortion.” This exception considered the physical and mental health of the woman as medically relevant for whether an abortion could happen. Decisions about rubella-related abortion happened in the context of the doctor-patient relationship.

Because rubella was so common, and because an infected person could be asymptomatic, some physicians had argued as early as the 1950s that rubella served as a convenient way to circumvent the laws restricting abortion.

In fact, prior to Roe v. Wade in 1973, a rubella diagnosis was one of the main ways for women to obtain safe abortions, performed by qualified doctors, without either physician or patient subject to prosecution.

Even when abortion was illegal throughout the U.S., the law recognized the primacy of the doctor-patient relationship, deferring to the authority of American medicine and the privacy of women’s medical decisions. Roe v. Wade, which legalized abortion in the U.S., is built on the right to privacy.

The development of the vaccine

In the aftermath of the 1964-65 epidemic, epidemiologists predicted that another rubella epidemic – along with thousands of babies born deaf or blind – would begin in 1970. This spurred the effort to develop a rubella vaccine to prevent birth defects. However, another goal was to reduce what vaccine researchers at the time often referred to as “fetal wastage,” a euphemism for abortion. In fact, many in the medical profession at that time appeared to view women’s health as secondary to the importance of pregnancies brought to term with healthy babies and avoiding “unnecessary abortions.”

A preventive vaccine became available in 1969, and versions are currently in wide use; it is the “R” in the trivalent childhood MMR vaccine. Today, the Centers for Disease Control and Prevention reports that rubella, once endemic, has been all but eliminated in the U.S., and rubella-related birth defects with it.

In 1970 when the predicted epidemic failed to materialize, credit went to mass vaccination (despite some uncertainties, as the population had already been largley immune). This meant that the underlying social issues that rubella had raised – the role of medicine in regulating access to abortion; whether the physical and mental effects of birth defects on women justified an abortion – would be deferred.

Still, the realization that birth defects were an important consideration in the politics of abortion made therapeutic abortion more available between 1965 and the 1973 Roe v. Wade decision, as blood tests replaced clinical diagnoses, though the rate of rubella-related birth defects remained unknown.

The rubella outbreak happened in a context where abortion was illegal – save for medical exceptions. In much of South America, where Zika’s effect has been greatest, access to safe abortion is severely restricted.

As Zika has spread in Latin America, researchers have found that abortion requests have increased, setting the stage for a replay of the history of rubella. As with rubella, in areas where Zika has become prevalent and abortion is almost always illegal, women have begun to demand access to therapeutic abortions.

Perhaps, therefore, medical and public health measures will stop Zika, as they did rubella for North Americans.

But developing a vaccine for Zika or halting its spread will not address the social issues that the virus has raised: women’s right to control their own bodies, concerns about “fetal wastage” and the relative importance of healthy, live births versus women’s mental and physical health.

Jacob Heller does not work for, consult, own shares in or receive funding from any company or organization that would benefit from this article, and has disclosed no relevant affiliations beyond the academic appointment above.