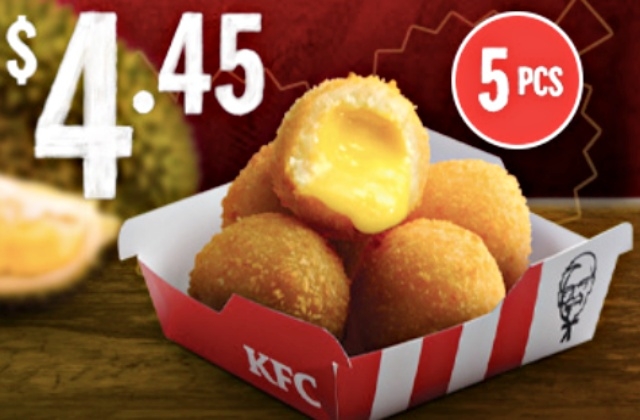 KFC Singapore has brought back one of the local’s favorite dessert items, and it is called the Golden Durian Mochi. It will be available in stores across the country starting Monday, March 21.

As mentioned on Mothership, the Golden Durian Mochi was first rolled out at KFC in April of last year. The dessert is made with D24 durian lava and deep-fried with its mochi wrapping, and these were declared sold out just a few days after release at that time.

KFC Singapore’s durian balls were described as chewy with molten D24 sweet premium durian lava oozing out with every bite. On the fried chicken restaurant’s website, it is promoting the food item with the enticing description that reads: “Bite into one of these golden mochi balls and experience sweet fragrant durian lava flowing into your mouth! Careful when it’s hot, it ain’t a joke when we say flowing premium D24 filling.”

In any case, with the durian mochi’s return this year, it will be available on all of KFC outlets in Singapore except for two locations which are the zoo and Singapore Polytechnic. Customers will not be able to get it even for takeaway or KFC Delivery at these locations.

As per Great Deals, to make sure that the Golden Durian Mochi will not run out fast this year, KFC has prepared more stocks this time. Apparently, the dessert is so popular that the restaurant made preparations to make sure it can let more customers enjoy the limited-time food item.

Fans can get the durian balls at KFC Singapore branches for S$3.95 for five pieces and the bigger package of 10 for S$7.80. The prices were slightly raised from last year’s rates.

Meanwhile, aside from the availability of Fried Durian Mochi Balls at KFC Singapore, the restaurant is also offering other Hot & Crispy Deals. As posted on Goody Feed, the fried chicken brand wants to give more, so it is offering more meal deals until early April.

There is also the Zinger Box that only costs $7.95 and includes one Hot & Crispy Chicken, one Zinger burger, a regular fries, a whipped potato, and Pepsi Black. This will be up from April 6 to 19.