It's great to want wage growth, but the way we're going about it could stunt the recovery

Patent system often stifles the innovation it was designed to encourage 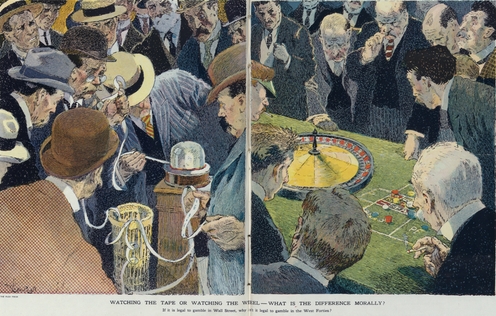 'Watching the tape or watching the wheel - what is the difference morally?', illustration by Will Crawford c.1912 Puck Magazine/Library of Congress 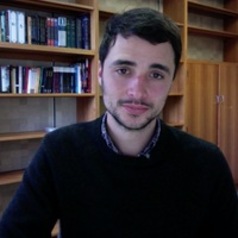 The gleeful manipulation of GameStop’s share price is not the first time amateur investors have created a legitimacy crisis on Wall Street.

In the late 19th century, so-called “bucket shops” allowed the American public to gamble small amounts on the movement of stocks and commodities on the New York and Chicago exchanges.

In most cases, a bucket shop client wouldn’t own the stock they wagered on: the shop acted more like a bookmaker than a broker, with clients betting against the house that a certain stock would rise.

Historian David Hochfelder describes bucket shops as a “shadow market”. For American Studies scholar Peter Knight, they were a “financial netherworld”. Some bucket shops were outright confidence tricks. The house could manipulate the telegraphic feed of stock prices or arrange “wash sales” to tank heavily-favoured stocks.

In 1892, The Sun reported on one of Chicago’s women-only bucket shops, filled mostly with:

elderly maidens and widows, with an occasional married woman who dabbles in stocks without the knowledge of any one but her broker. 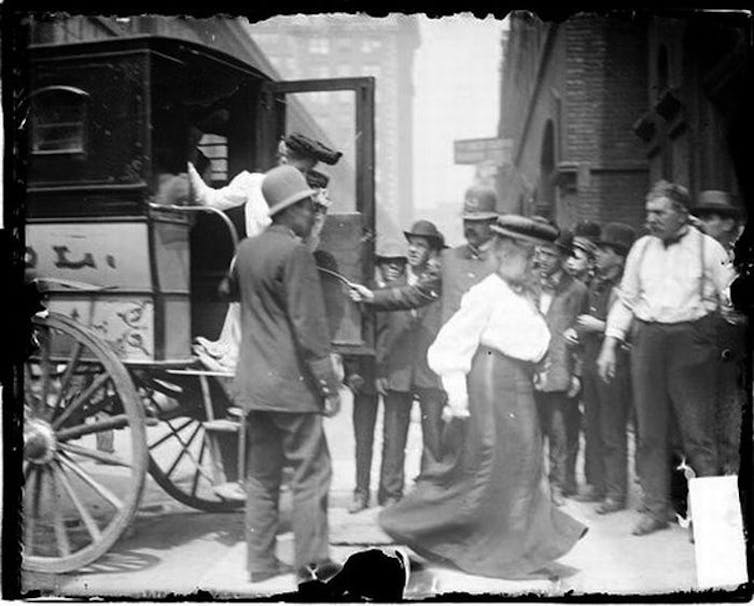 This was the beginning of the American middle class’s real and imaginative investment in high finance.

Between the sanctioned and the shadows

Bucket shops mimicked the operations of the club-like bastions of American finance. Increasingly backed by big money and arranged in national chains, their interiors were often fitted with plush furniture and seductive technologies such as stock tickers and telephones. 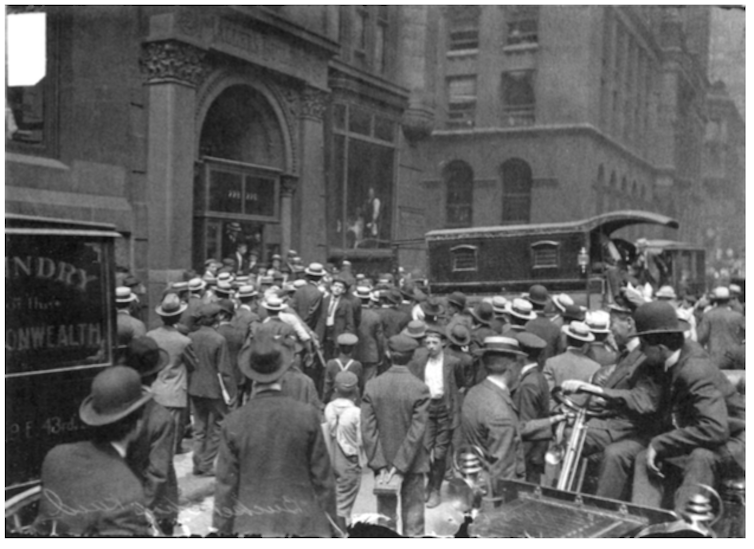 Writing on GameStop for the Washington Post, Sebastian Mallaby made the distinction between “rational investors” who work to stabilise the market and keep prices realistic and “honest”, and the “crazies” whose frenzied activity creates irrational prices.

We saw similar language used by the finance industry of a century ago, asserting the superior masculine equipoise and rationality of trained financial professionals compared to the “hysteria” of bucket shop amateurs.

The Sun, for instance, suggested amateur women traders become “oblivious to sentiment and careless of personal appearance, and absurdly superstitious”. 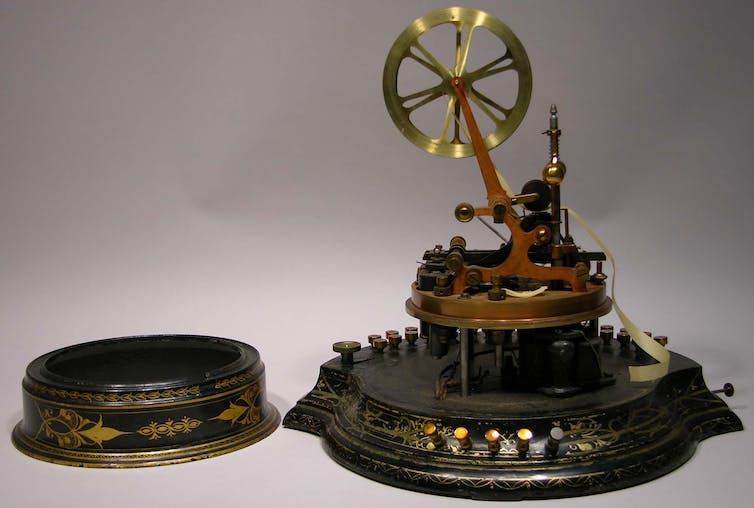 Stock tickers would receive information about stock movements via telegraph, and print the details onto ticker tape. National Museum of American History

Tickers transmitted stock information over telegraph lines, and were available for anyone to purchase. One pro-Wall Street journalist described the ticker as a “narcotic”, while a doctor writing for the Medical Times described the illness of “tickeritis”:

I have long held the theory that the constant ticking of the instruments in the broker’s office throws the majority of traders into a state of self-hypnosis.

Through trade journals, financial newspapers and guidebooks the finance industry argued professional brokers were immune to the ticker’s allure.

The professional brokers and trained tape readers who interpreted the stock market fluctuations were said to be silent, private, studious and affectless.

“The Tape Reader is like a Pullman coach,” wrote the pseudonymous Rollo Tape in his Studies in Tape Reading (1910):

which travels smoothly and steadily along the roadbed of the tape, acquiring direction and speed from the market engine, and being influenced by nothing whatever.

The NYSE itself helped to propagate the image of the ticker reader as a rational actor in an efficient marketplace. An official illustrated history published in 1919, writes historian Julia Ott, presented “photographs of empty, tidy trading floors and small groups of neatly attired clerks calmly operating pneumatic tubes, tickers, and telephones”. 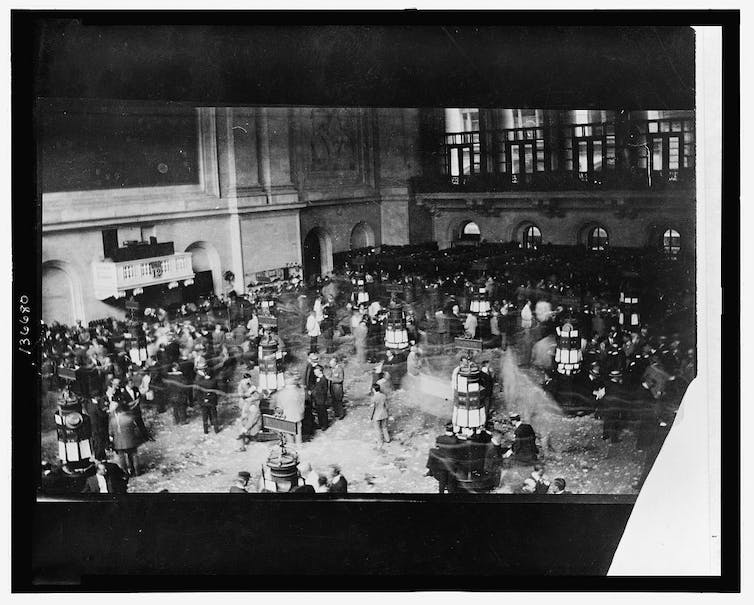 The New York Stock Exchange, secretly shot with a camera hidden in the photographer’s sleeve, 1907. Library of Congress

In tandem, the NYSE challenged cultural representations of stock trading as a collective frenzy.

A 1914 film adaptation of Frank Norris’s The Pit (1903) was threatened with a libel suit for depicting the psychological dissolution of a power-mad commodities dealer in the eponymous pit at the Chicago Board of Trade.

Changes to the film were secured after the legal threat was issued.

Over 100 years ago, the NYSE established a false though rhetorically seductive dichotomy: the gambler, the amateur, the crowd and the hysteric stood in opposition to the professional broker, whose part-mechanical subjectivity is cool, self-regulating and immune to panic.

Today, both sides of the GameStop struggle are likewise invested in mythmaking and false dichotomies: Robinhood vs The Man; the Rational vs the Rabble.

But it is clear that both sides are more similar and more entangled than they would care to admit. This poses difficult questions for the finance industry as it tries to shut out the rabble while maintaining the status quo.