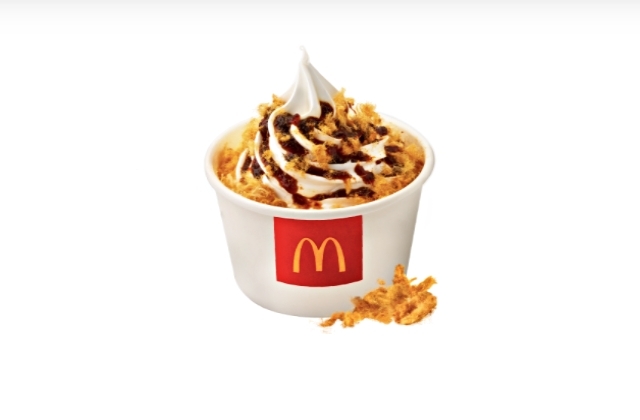 McDonald's Thailand dropped a new food item, and it sounds bizarre for a dessert. The fast-food chain launched the Chili Paste Pork Ice Cream, and people hearing this name can't help but wonder if it is really a dessert or a new burger flavor.

As per ChewBoom, the Chili Paste Pork Ice Cream being sold at McDonald's Thailand outlets is really a sweet dessert. In fact, it features the restaurant's signature vanilla soft serve, and the flavor is achieved with the addition of shredded pork floss and chili paste sauce.

The taste and texture are said to be a unique combination of rich, spicy, and meaty ice cream experience. The pork floss is a dried bit of pork but it is very light and one can taste the hint of saltiness with a bite.

The Chili Paste Pork Ice Cream at McDonald's Thailand is available until April 5. It should be noted that some of the stores in the country may not have this food item so customers must check the location first to see if the product is available.

In any case, this unique "meaty" ice cream flavor may not be appealing to McDonald's customers in other countries such as in the U.S. but this is surely alright with the locals since this was created according to their palate. It is also topped with some of the favorite local flavors so this can be enjoyed by the Thais.

Finally, as mentioned on Pop Culture, this is not the first time that a regional McDonald's branch has added chili to its soft-serve ice cream. In fact, around this time last year, the burger joint introduced the "Yóupō Làzi" Sundae in China and it was sold at participating stores there.

The ice cream sundae also features vanilla ice cream and it was drizzled with chili oil and topped with bits of peppers, garlic, onion, and other seasonings. But then again, the unusual dessert was only sold for a day at that time. It was still purchased by the locals so the Chili Paste Pork Ice Cream at McDonald's Thailand is also expected to fare well in the stores.