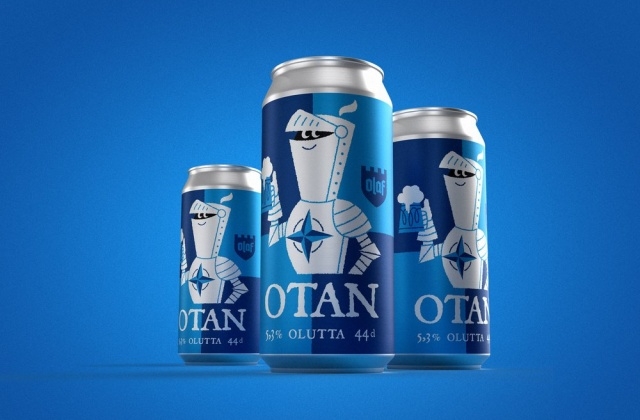 A Finnish brewery called Olaf Brewing launched a NATO branded beer, and this comes at a time when Finland is seeking to join the North Atlantic Treaty Organization. Over the weekend, the Savonlinna-based brewery decided to push through with the idea of producing a NATO-inspired yeast-fermented alcoholic drink.

Finland finally decided to become a member of NATO in response to the ongoing war in Ukraine that was started by Russia. The country said that it would be joining the military alliance, and Olaf Brewing was inspired by this move and created the OTAN beer.

As mentioned on Fox Business, the can of OTAN beer features a blue label with a cartoon character wearing a metal armor suit. The armor has an imprint of NATO's compass emblem on the front.

It was said that the beer's name "OTAN" with the "Olutta" word in the lower part of the can means "I will have a beer" in Finnish. On the other hand, in French, OTAN is also an abbreviation for NATO, an organization that has two official languages, which are English and French.

Finland and its neighboring country, Sweden, made an announcement that they intend to become members of NATO as Russia is trying to invade Ukraine. The leaders of both countries will be visiting the White House this week for a scheduled meeting the U.S. President Joe Biden.

They are expected to "discuss Finland's and Sweden's NATO applications and European security, as well as strengthening our close partnerships across a range of global issues and support for Ukraine," as per Karine Jean-Pierre, the White House press secretary.

In any case, the new NATO-inspired beer will be produced from Olaf Brewery's facility in the town of Savonlinna, where the historic Olavinlinna Castle was built in 1475 is also located. The place has also been the site of many battles, including World War II, and sits close to the Russian border.

"In the past, we haven't taken much of a stand in political affairs. Now, however, the majority of Finns are behind the Nato decision," YLE News quoted Olaf Brewery's chief executive officer, Petteri Vänttinen, as saying with regards to their decision to go ahead with the plan of launching the NATO branded beer. "That's why we dared to take such a step, and it didn't really require a lot of daring, we just decided to do it."