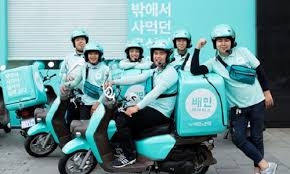 Baedal Minjok has the most users in South Korea among food delivery services with 13.73 million last month.

South Koreans spent 12.2 trillion won on the country's top two food delivery services, Baedal Minjok and Yogiyo, last year, up 75 percent from 6.95 trillion won in 2019, according to the data from industry tracker WiseApp.

The increased expenditures were attributed to the stay-at-home trend triggered by the pandemic.

The combined transactions on the two services reached a monthly record high of 1.44 trillion won in December.

Baedal Minjok has the most users with 13.73 million last month, trailed by Yogiyo at 7.17 million, and Coupang Eats at 2.58 million, according to WiseApp.

Delivery Hero expects to receive final approval for the deal in the first quarter.