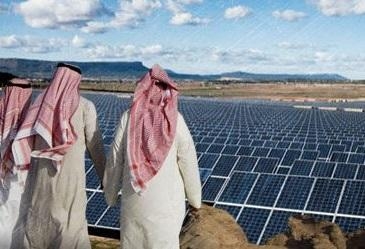 KAUST's cooling system, considered a new concept in the industry, was demonstrated on a small-scale PV panel.

New research by the King Abdullah University of Science and Technology (KAUST) in Saudi Arabia has been able to deliver close to 20 percent electricity generation increase by using atmospheric water vapor to cool down solar panels.

This cooling system, considered a new concept in the industry, was demonstrated on a small-scale PV panel.

The team plans to scale it up to the size of a commercial PV panel in the next couple of years.

One of the main issues regarding solar panels were the high temperatures it generates during the daytime, reaching 40 C higher than the ambient air in Saudi Arabia.

According to Dr. Peng Wang, a KAUST professor who is leading the study, this is due to commercial panels, which cannot convert over 20 percent of the solar energy they absorb into electricity.

Consequently, more than 80 percent of the absorbed solar energy is undesirably converted into heat.