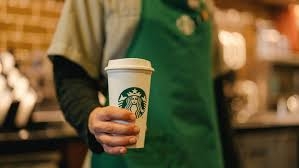 Starbucks expects its comparable sales to rise between 5 percent and 10 percent in the second quarter .

Starbucks Corp. reported a 5 percent drop in sales in the first quarter ending Dec. 27, more than analysts’ estimates of a 3.4 percent decline, as the soaring number of coronavirus cases in the United States kept customers at home.

The comparable sales decline was also higher than expected at 6 percent for the Americas region, compared with a 5.2 percent drop mentioned by analysts.

However, in Starbucks’ biggest growth market of China, comparable sales increased 5 percent due to the popularity of its rewards program and the return of pre-pandemic consumer habits.

Starbucks expects its comparable sales to rise between 5 percent and 10 percent in the second quarter while being forecast to grow nearly two-fold in China, a year after the pandemic struck.

The Seattle-based company's net revenue plunged 5 percent to $6.7 billion, missing a forecast of $6.93 billion, while net earnings plummeted from $885.7 million or 74 cents per share in the previous year to $622.2 million, or 53 cents per share.

On an adjusted basis, Starbucks earned 61 cents per share, surpassing estimates by 6 cents.