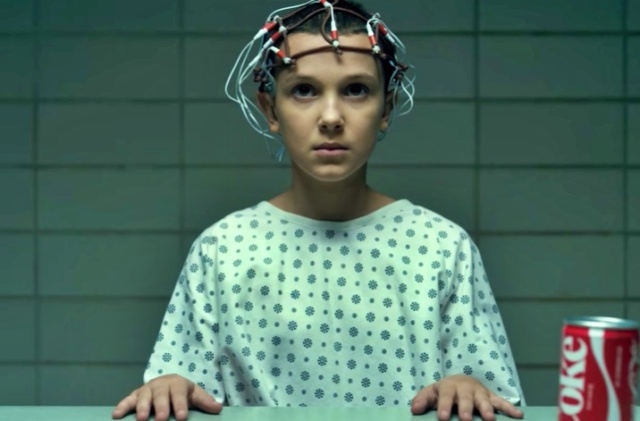 The cast and production team of “Stranger Things” season 4 confirmed earlier this month that they have started shooting again after more than six months of hiatus. The team was in the middle of filming in March when they were forced to stop as the coronavirus massively spread in the U.S. and other parts of the world.

In a new update, photos of the cast were released online. The snaps show some of the main cast members of “Stranger Things” season 4 such as Joe Keery (Steve Harrington) and Maya Hawke (Robin Buckley), Gaten Matarazzo (Dustin Henderson) and Sadie Sink (Max) were posted by Just Jared. The group was filming at a video store set in the 80s.

Previously, Caleb McLaughlin (Lucas) was spotted filming a scene where he wore the same outfit he was seen in the finale of season 3. This confirmed the fact that “Stranger Things” season 4 is picking up from where exactly they left off in the third installment. Perhaps, it is also possible that he was filming a flashback.

Everyone is hoping that there will be no more interruptions so the cast and crew can film smoothly and finish the fourth season with no more delays. But then again, since the COVID-19 situation is quite unpredictable, there is no way to tell if they can shoot continuously until the production is complete.

In any case, while fans wait for “Stranger Things” season 4 premiere, there are many theories on what could happen next. First of all, since Hopper is already confirmed alive, there is a theory that this Hopper is different from who everyone knows as a sheriff back in Hawkins.

As posted in The Sun, David Harbour will return as evil Hopper. In season 3, he disappeared after the machine that sealed off the Upside Down exploded. Then in the fourth installment’s teaser, he was shown alive in Russia.

It was theorized that Hopper could have been brainwashed by the Russians so he turned bad. He could be attacking Eleven, his adoptive daughter, later on in “Stranger Things” season 4 so it will be a heartrending scene.

There was also a suggestion that the upcoming season will be set during or after the Chernobyl nuclear power plant disaster in Ukraine. Since the third installment was set in 1985, it is possible that they will use this historic catastrophe since they are in Russia.

Lastly, Dr. Brenner could be alive as well. It is believed that Matthew Modine who plays Dr. Martin Brenner dropped a hint suggesting that his character is coming back in “Stranger Things” season 4. He explained that the Duffer brothers always say that unless you see a body, the character is not dead.

“And obviously, we never saw Dr. Brenner’s body,” he told NME in an interview. “Dr. Brenner isn’t as bad as some of the fans think he is. What did he do that’s so bad? I’ve watched the show, and I don’t think Dr. Brenner ever killed anybody.”