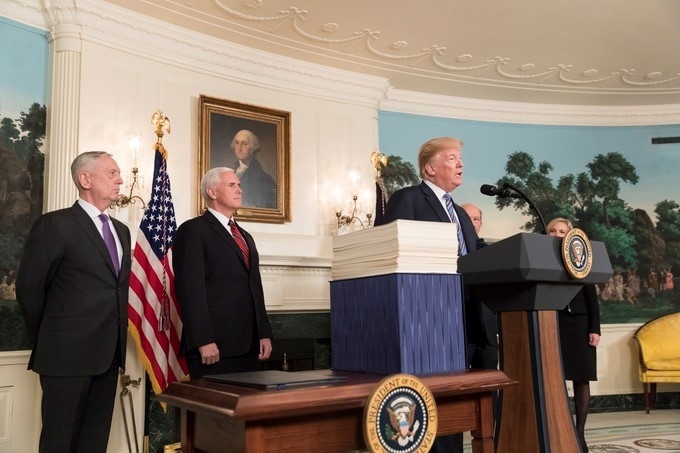 There is a lot of speculation that former President Donald Trump is set on launching another presidential bid following his loss to Joe Biden in the 2020 elections. A recent report reveals that the former president is already vetting potential running mates for a possible 2024 bid.

People familiar with the matter told Politico that the twice-impeached former president is already vetting potential running mates for a 2024 bid. Trump is reportedly prioritizing unquestioned loyalty to him and the embracing of his false election fraud claims in his search for a possible running mate. However, Trump is also appearing to consider selecting a woman or a person of color as his running mate.

“Once you get past those two issues -- loyalty and Trump going more with his gut -- Trump has a lot of leeway in who he would pick,” said top Trump pollster Tony Fabrizio.

“He’s not necessarily looking to balance the ticket geographically, but what he can do is pick to balance gender, race, ethnicity -- a lot of different lanes there. It could be anything from a Tim Scott in South Carolina to an Asian American in California, somebody Hispanic in Texas. There are so many choices, and there’s lots of time to go.”

One adviser was told by the former president that people who support him are all “begging” to be selected. The former president appears to be drawn to the idea that his vice president should act as a loyal adviser following the rift that has now grown between him and Mike Pence since the Capitol insurrection. There is a chance that Trump may choose his former chief of staff, Mark Meadows, to become his running mate for that instance, according to the report.

The former president has sought to block records of his White House related to January 6, citing executive privilege, a reason that has also been used by his allies who are set on defying congressional subpoenas. While Biden has already denied invoking executive privilege on the documents that the panel seeks to obtain, Trump has argued that he still has some rights to the claim as a former president.

Rep. Jamie Raskin, who serves on the House Committee, said that Trump and his allies are trying to stall for time, knowing that the committee is running on limited time to finish its investigation.