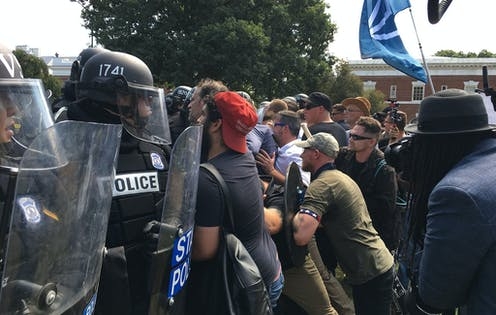 White supremacists clash with police in Charlottesville in 2017. Evan Nesterak/Wikipedia, CC BY 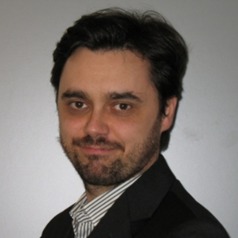 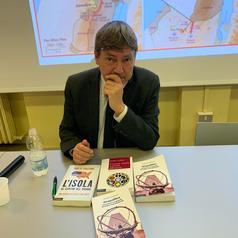 According to Moïsi, the territory of fear is inhabited by those “who are apprehensive about the present and expect the future to become even more dangerous”. Perhaps today we should realize that fear has conquered the world. Otherwise put, we live in a time, which is spatially organized by globalized fear, and this, politically speaking, is not a good omen.

The old powers remain the pioneers, so to speak, of this globalized emotion. The concern for the present and the conviction that the future may only get worse have been materializing for decades now in two areas of mass behavior, the nature of which is intrinsically antisocial: the explosion of public expenditure (and debt), and the drop in birth rates. The connection is that when no good is expected to come from the future, it is better to spend everything immediately, even what you do not have. Similarly, it is better not to have children, who would be plagued by the burden of debts developed with such nonchalance.

In the territory of fear, the cry of “every man for himself” echoes in sinister ways. A few days after the arrival of the pandemic in France, President Emmanuel Macron qualified the “return of fear” as an opportunity to rediscover solidarity and “human values”.Yet nature and history suggest otherwise: rarely does fear allow us to reconnect with “human values”. To take refuge from danger is human only because it is a spontaneous reaction of organisms, guided by the instinct of self-preservation. Such an individualistic form of resilience often lacks constructive, collaborative features; when running away from danger, it is easier to run past (rather than rescue) your neighbor.

Why did the prevailing optimism of the 1950s and 1960s look confidently at the future, producing more than was consumed and resulting in a baby boom? Because post-war reconstruction was made of “economic miracles” that made life easier and more prosperous. During the trente glorieuses (the “30 glorious years”, the idiom used for France’s economic boom), experience taught us we could quickly move from worn shoes to a bicycle to a motorcycle to a compact car. Then we bought cars big enough for the family and used them to reach tourist destinations, where we would stay in affordable hotels, and where eventually we would buy a holiday home. Everything seemed so easy.

The constantly rising living standards and conditions in general was a reality unfolding before our eyes, and something that could not be overlooked. Then, in 1973, the first crisis hit. The myth of an exponential welfare growth started cracking. The first new competitors, at the time cautiously called “newly industrialized countries”, began to loom on the horizon. At the end of the decade, South Korea had become the second shipbuilder in the world, behind Japan, with a production twice as large as Germany, and four times larger than that of the United States.

The world domination of the old powers was experiencing a crisis. These powers could no longer exploit all the resources of the world’s market undisturbed, they had to share them with emerging competitors, which meant that also the benefits derived from that undisturbed exploitation could not continue to be the same.

We know that the fear of losing what we have is more anxiogenic than the fear of not gaining assets we do not own in the present. The perception of risk in decision making is relative to the present condition, and depends on past experience, making humans more loss averse, as the Nobel Prize–winning prospect theory has shown.

What a geopolitical reading adds to this awareness is that such a fear of losing what people think belongs to them creates enraged reactions. It prompts the need to rely on leaders who promise to give citizens back what was taken from them (or what people believe was taken away from them).

People therefore entrust their destinies to whomever promises to give their countries back to them, or make them great again. Even better if these miracle pushers publicly mock or attack the social groups presumed to be the key responsible for our anxieties: the immigrants, Muslims, Jews, large corporations, the rich, the Freemasons, Wall Street, Big Pharma, the globalists, Bill Gates, the Vatican… you name it.

The 2008 crisis and especially the following slow and incomplete recovery have transformed social fear in a political weapon in the hands of voters. Brexit, the election of Donald Trump of 2016, the Italian elections of 2018, are just some examples. Joe Biden won the 2020 US elections with more than 81 million votes, but despite all the scandals and the first of two impeachments, Trump still got 74 million.

India, the Philippines, Brazil, Russia, Venezuela and, to a certain extent, also China have abandoned the territory of hope. The attempt of Muslim countries to break free from the territory of humiliation was frustrated by the bloody repression of various versions of the “Arab spring”. Everyone converged toward the territory of fear.

Thucydides, Aristotle, Machiavelli, Hobbes and many others explained how fear is a tool for princes to control their subjects. Today, fear has become the dominant sentiment of subjects, who expect miracle recipes from their princes. But those recipes, as we have witnessed in recent years, do nothing more than render the world even more frightening.