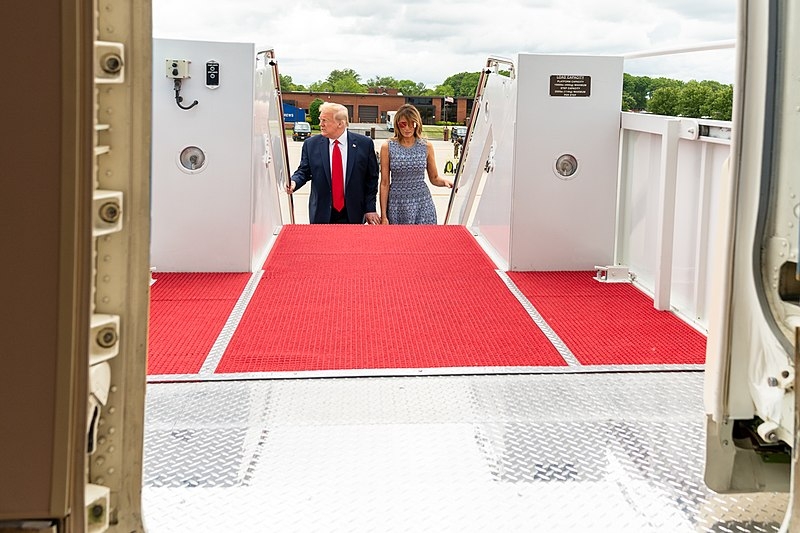 June 25th marks the 70th anniversary of the Korean War, when the forces of North Korea invaded South Korea in a conflict that has yet to reach an end. President Donald Trump and first lady Melania Trump recently commemorated the occasion when they visited the Korean War memorial.

The Daily Mail reports that the Trumps visited the Korean War memorial at Washington DC. They laid a wreath to pay respects to the American soldiers who died during the conflict between North and South Korea while also greeting the surviving Korean War veterans who were present. They followed their visit with a stop at the Korean War Veterans Memorial at the National Mall near the Lincoln Memorial.

As per social distancing guidelines, no one shook hands and the Trumps stood several feet away from the veterans who were present.

Around 5,000,000 soldiers died overall during the Korean War, 36,000 of which being members of the US Armed Forces. The fighting stopped in 1953 with an armistice and the Korean peninsula remained split by the Demilitarized Zone. Tensions between the two Koreas resurfaced as of late when North Korea blew up the South Korea-built liaison office on its territory. Back in May, North Korea also opened fire at one part of the Demilitarized Zone, but South Korea officials say the cause was likely accidental but it was still seen as unusual given that such incidents at the border are rare.

Meanwhile, a body language expert, Judi James previously analyzed the body language of both the first lady and first daughter and White House adviser Ivanka Trump. Ivanka Trump is the stepdaughter of Melania and Donald Trump’s eldest daughter from his first marriage. James said that while the age gap between the two Trumps is relatively small at 11 years, the body language suggests that Ivanka looks up to Melania.

James explained that the way Melania conducts herself leans more towards “red carpet than White House” and Ivanka has shown a similar way of composing herself as well despite having a very important role in the White House. “POTUS’s daughter appears to be mirroring or mimicking her stepmother Melania’s signature beauty queen pose, which could have implied some subliminal admiration for her,” said James.