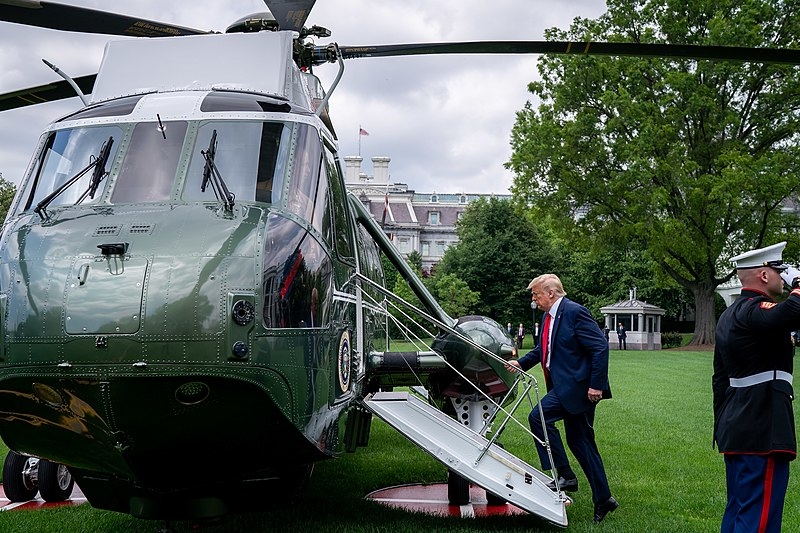 The ongoing protests have resulted in violent altercations between protesters and local law enforcement. However, in the incident involving activist Martin Gugino, who was pushed by police officers in Buffalo, New York, President Donald Trump claimed that the incident in itself was a setup and that Gugino was an ANTIFA “provocateur.”

The Guardian reports that Trump made the accusation towards Gugino, a 75-year-old peace activist on Twitter that was hospitalized after the police pushed him to the ground. Soon after, blood could be seen gushing from his head.

“Buffalo protester shoved by Police could be an ANTIFA provocateur. 75-year old Martin Gugino was pushed away after appearing to scan police communications in order to black out the equipment. @OANN I watched, he fell harder than was pushed. Was aiming scanner. Could be a setup?” tweeted the president. Trump mentioned the far-right One America News Network, that aired the conspiracy theory prior to his tweet.

The police officers involved were then charged with second-degree assault as the video footage of the incident went viral. All 57 members of the Buffalo emergency response team resigned from their posts as a show of support towards their two colleagues.

Trump was soon under fire for the claims which he offered no proof of. New York Governor Andrew Cuomo criticized the president during his daily briefing and said that Trump was only making things worse by pushing the conspiracy theory in the midst of a very tense time. Cuomo called for Trump to show decency and humanity as this was the latest example of police brutality that many, especially African-Americans are protesting to put an end to in the wake of George Floyd’s death.

Hawaii Democrat senator Brian Schatz also expressed his displeasure towards Trump’s recent tweet and said that Republicans should ask themselves if they would still support a President would push a conspiracy theory.

South Dakota Republican Senator John Thune was also critical of Trump. Thune told the press at the Capitol that Trump made a serious accusation yet provided no evidence to back up the claim. When pressed if he thought Trump should not be making such a claim, Thune responded, “Well, I think that’s a given.”