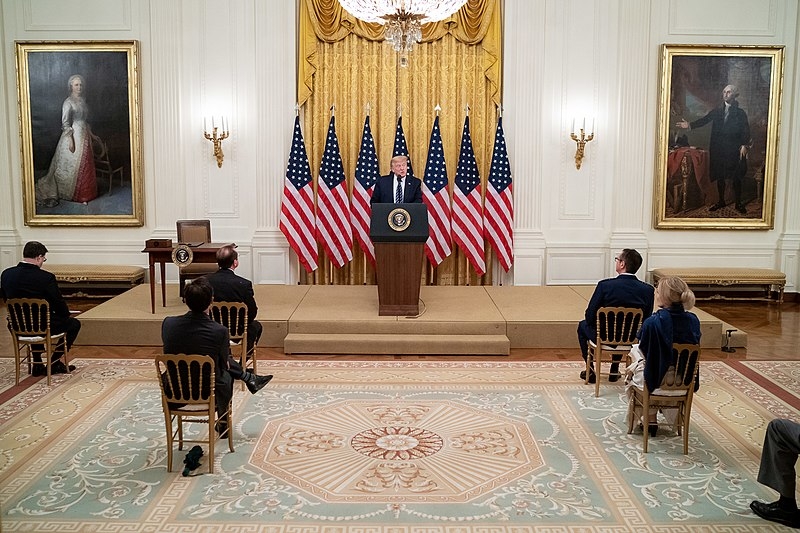 The coronavirus pandemic has brought President Donald Trump off the traditional campaign trail for several months. Keen to get back on track in time for the November elections, Trump and his campaign are planning to bring back the MAGA rallies over the next two weeks.

Politico reports that Trump’s advisers are still in discussions as to how to restart the MAGA rallies and where as well as developing safety measures especially as the United States is still in the midst of battling the coronavirus. Over the coming days, campaign manager Brad Parscale is expected to present the president with options.

According to Parscale, “Americans are ready to get back into action and so is President Trump. The great American comeback is real and the rallies will be tremendous. You’ll see again the kinds of crowds and enthusiasm that only Sleepy Joe Biden can only dream of.”

Of course, Trump has been pushing to restart traditional campaigning again, along with the campaign rallies where he continues to assure his supporters that he is responsible for the country’s economic recovery and reopening. Last week, Trump held a press conference to boast about the strong jobs reports, and his campaign jumped on the opportunity to boast about the said reports.

There is another possible reason as to why Trump is pushing for holding his MAGA rallies again. Although the president may face backlash for holding this kind of in-person event in the midst of the pandemic, according to his advisers, timing this with the ongoing protests would make it hard for critics to target him.

Speaking of the protests, CNN reports that Trump has not spoken to any protesters or met with black advocates that are calling for change. US presidents are usually called to visit the site of the tragedy and call for a united front amongst the people. However, Trump appears to have chosen to express his sympathies through social media behind the now-barred gates of the White House.

His attempts to address the ongoing protests and demonstrations have been criticized by Americans across the board. In his stead, it seems that Vice President Mike Pence is conducting the listening sessions with black Conservatives and spiritual leaders, leaving out the family of George Floyd. Although Trump has spoken to members of Floyd’s family, Philonise Floyd, the brother, recalled their conversation as brief and that Trump did not give him a chance to air out his grievances.