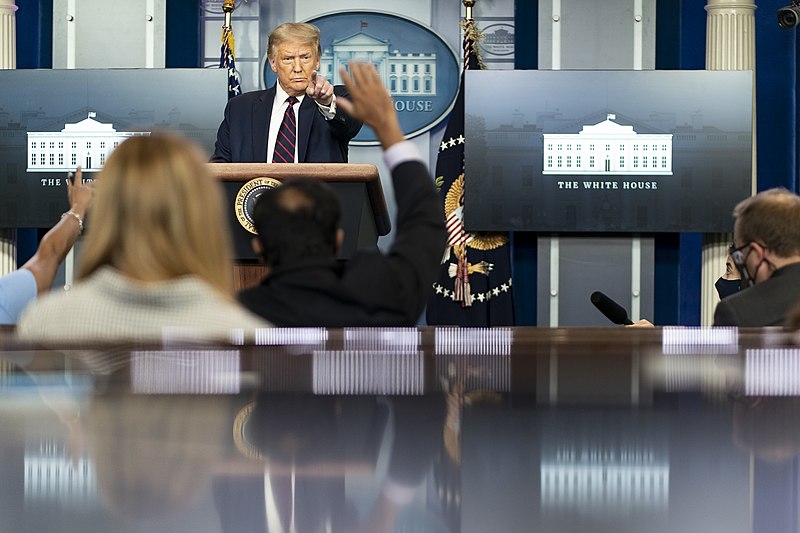 In the midst of a global pandemic, Donald Trump is also up for reelection, facing off against former vice president Joe Biden. Trump’s official Facebook page has posted a campaign ad made by a faith group supporting the president, but the photos used appear to be misleading.

BBC reports Trump’s official Facebook page shared a photo made by the group Evangelicals for Trump. Two photos are used side by side, and the caption reads “Public Safety vs. Chaos and Violence” with the photo on the left showing Trump talking to police officers while the photo on the right shows police officers being surrounded by protesters, supposedly depicting the violence in the United States.

However, the photo of the police with the protesters is not from the United States but in Ukraine, during a pro-Democracy protest back in 2014. The badge on the police officer’s collar on the photo of right is a different symbol from what the US law enforcement usually wear - it is a Coptic cross, seen in countries that practice Orthodox Christianity. The security official in the photo is also not a security officer but a member of the “Internal Troops of Ukraine,” a defunct division of the military in Ukraine that would assist in policing.

This was pointed out by former first lady Hillary Clinton’s staff member Jesse Lehrich and shared on Twitter. Facebook stated that they will not take any action on the post. The social media platform has long been pressured by many activists a few months back to take down any harmful content or misinformation being spread. Despite no action taken, Facebook has only begun labeling posts shared by Trump as well as Biden without doing any fact-checking.

This week, it was revealed that in 2018, Trump asked the US Ambassador to Britain, Robert Woody Johnson IV, to request that the British Open take place at the Trump Turnberry Resort in Scotland. Johnson, in turn, supposedly asked Scotland’s Secretary of State David Mundell if the Turnberry Resort could host the sporting event.

However, deputy ambassador Lewis Lukens, who is also Johnson’s predecessor, warned Johnson against making the request as it would pose as a conflict of interest as well as an unethical use of political power. Lukens then contacted the State Department officials following the supposed conversation. None of the succeeding British Opens have taken place in Turnberry.