Donald Trump: POTUS says coronavirus briefings will resume as death toll goes up to over 143,000 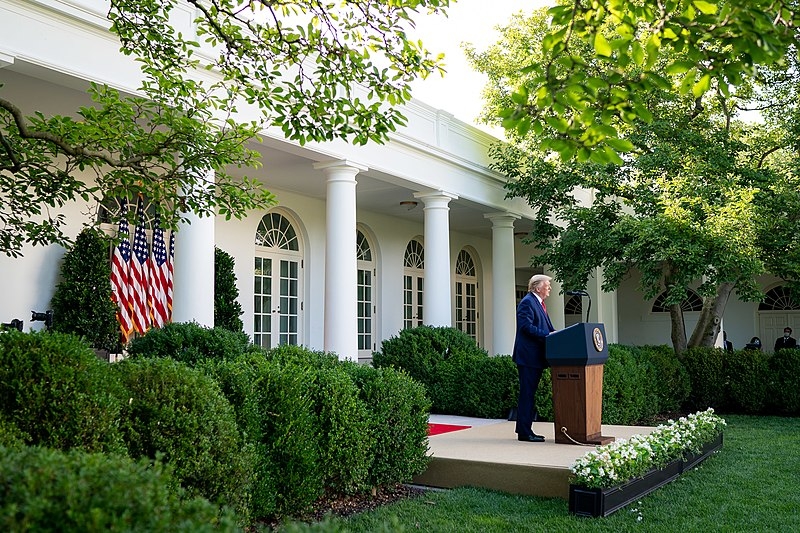 The regular White House coronavirus briefings were halted for the past few months since Donald Trump sought to reopen the country and restart the economy. In a shift in tone, Trump has now said that the regular briefings will resume, perhaps quietly acknowledging his administration’s heavily criticized handling of the pandemic.

CNN reports Trump revealed that he would bring back the almost daily coronavirus briefings to lawmakers at the Oval Office. A stark contrast to his previous view on face masks, Trump has also tweeted a photo of himself wearing one, calling such move “patriotic” after infamously refusing to wear one in public. Trump was seen wearing one for the very first time a few weeks back upon his visit to a military hospital. It was also in his latest social media update that he now advised Americans to wear face masks outside when social distancing could not be practiced.

Health experts have long been encouraging Americans to wear face masks outside and especially in public places.

This change in tone comes as coronavirus cases have exceeded millions, with over 143,000 Americans dead. However, over the weekend, during his interview with Fox News’ Chris Wallace, Trump continued to downplay the gravity of the coronavirus in the United States, saying that it will simply go away. These comments have since followed news of surges in several states, hitting record highs of new infections by the day.

Prior to Trump’s comments, vice president Mike Pence has also touted the advice of wearing face masks. Pence said during a phone call that wearing face masks or protective face coverings do help in slowing down the spread of the virus.

Trump’s change in tone also comes at a time when his reelection chances are falling behind his opponent, former vice president Joe Biden. The president has since trailed Biden in the public opinion polls over the past several months.

Meanwhile, The View cohost Meghan McCain recently responded to an old tweet by Trump towards her, insulting her television career. McCain posted a screenshot of the tweet on her Instagram. “@MeghanMcCain was terrible on @TheFive yesterday. Angry and obnoxious, she will never make it on T.V. @FoxNews can do so much better!” tweeted Trump at the time.

“I forgot Trump even did this. I think I’m doing okay with the old tv career...fun fact @theviewabc won best daytime talk show Emmy while I have been one of the cohosts this year. Trump and The Apprentice never won one. Ever,” wrote McCain in the caption of her post.