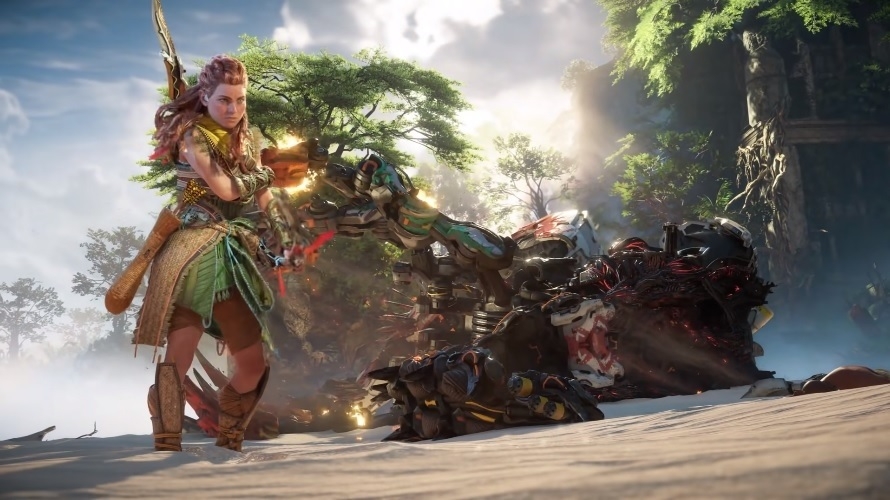 “Horizon Forbidden West” is still a little more than a month away from its release date, but a couple of screenshots allegedly from an early build of the game on PS4 have already leaked. And if there is any positive takeaway from this, it is that the images suggest the game would still look good on the last-gen console.

Earlier this week, two on-screen images were supposedly taken from an early PS4 build of “Horizon Forbidden West” circulated online. While the early Twitter posts containing the images have been taken down due to a copyright claim, fans may still be able to find the said screenshots on other platforms.

Some of the posts indicate that the leaked screenshots came from a jailbroken PS4 system. Meanwhile, the on-screen texts are in Russian, leading others to speculate that the leak may have come from someone working on the localization of “Horizon Forbidden West.” Either way, VGC reported that the leaks were real.

No other assets or story details have been leaked yet. But the purported PS4 screenshots may have given video game fans a clearer idea of the quality of “Horizon Forbidden West” in the older system.

While cross-generation titles are generally good as they allow more fans to have access to new releases, some argue that they could be a disservice to the games in some cases. There are concerns that video games designed for next-gen platforms might perform poorly, in terms of gameplay and game design, on older hardware like PS4. But seeing that the leaked “Horizon Forbidden West” PS4 screenshots look very detailed, this is a good indication that PS4 players might not have to worry about the sequel’s quality.

The appearance of “Horizon Forbidden West” in the PS4 screenshots also mirrors what Guerilla Games has promised PlayStation fans. “We actually developed and tested the game simultaneously on both PlayStation 4 and PlayStation 5, because it’s very important to us as a studio to ensure PlayStation 4 players get an equally immersive experience,” lead character artist Bastien Ramisse said in a blog post last September.

Meanwhile, VGC also reported that the leaked “Horizon Forbidden West” build has “the entire core content” that could be included in the final version of the game. And with the screenshots already out in the wild, it might only be a matter of time before other game, and story details get leaked as well. Fans are then advised to be cautious when browsing through online discussions about the game until it releases on Friday, Feb. 18.