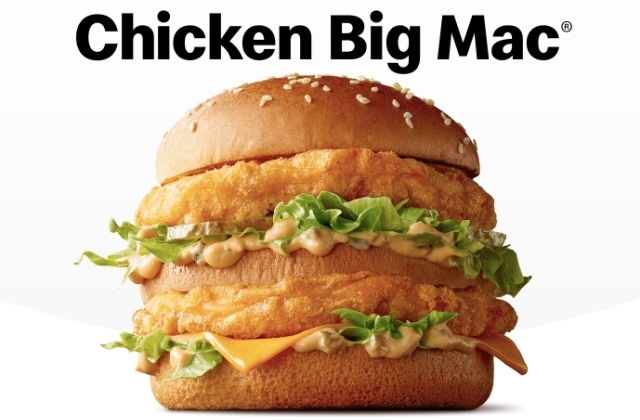 McDonald's is finally adding the popular Chicken Big Mac to its menu list in the United Kingdom. Although the sandwich is already being served in other countries such as the U.S. and Australia, this is the first time that it is landing in the U.K.

As per the U.K.'s The Sun, the McDonald's Chicken Big Mac burger will be arriving at the fast-food chain's 1,300 outlets in Britain starting Feb. 2. However, it will not be a permanent menu addition as customers can only order the sandwich until Mar. 15.

The Chicken Big Mac will feature two chicken crispy fillet patties instead of the usual beef patties in the regular Big Macs. This version is a bit pricier than the classic Big Mac that, cost £3.59.

McDonald's U.K. will sell this chicken sandwich for £4.09, which is 50p more expensive, and it may be ordered with a medium drink and chips for £5.59 and large for £5.99. Still, these prices could change depending on the location.

"It is one of McDonald's most requested menu items and it is finally here," Mirror quoted the McDonald's U.K.'s spokesperson as saying in a statement. "Featuring two 100% chicken breast patties in a crispy coating, a slice of cheese, lettuce, pickles and the deliciously world-famous inimitable Big Mac sauce between the iconic three-layered bun."

In any case, while the Chicken Big Mac is only coming to the U.K. next month, the Big Mac has been in the country's McDonald's restaurants' menu lineup since 1974.

Meanwhile, prior to the announcement of Chicken Big Mac's appearance at McDonald's U.K. outlets, the brand also revealed earlier this week that it will be removing two favorite breakfast items from the menu. The breakfast bagel and wrap will no longer be in the stores and they will not be coming back any time soon.