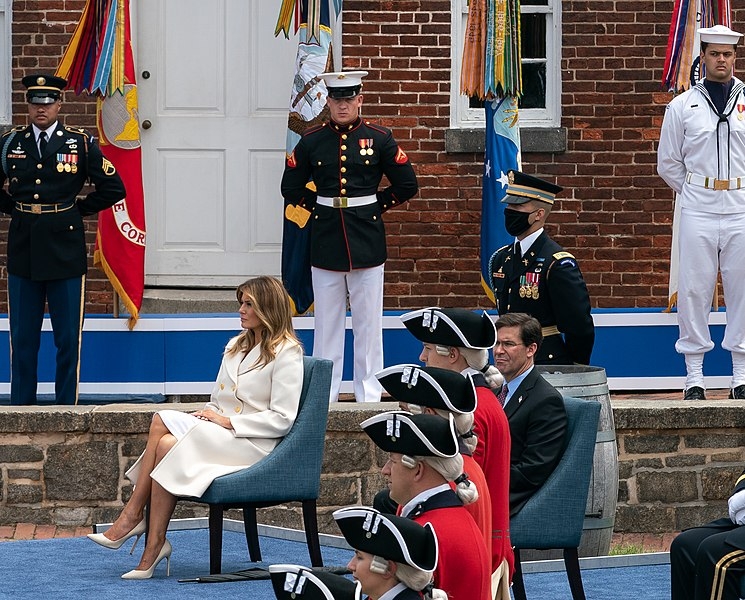 This week marks a historic week for the United States due to the upcoming NASA-SpaceX launch. First Lady Melania Trump accompanied her husband Donald Trump in visiting the Kennedy Space Center to see off the astronauts before they go on their flight.

The Daily Mail reports that the Trumps and the Pences flew to Cape Canaveral, Florida, to witness firsthand the first-ever launch of SpaceX’s Falcon 9 rocket and Crew Dragon capsule that will transport astronauts Bob Behnken and Doug Hurley to the International Space Station. Joining them were Donald Trump Jr. and his girlfriend Kimberly Guilfoyle, Eric Trump, and his wife Lara Trump as well as White House advisers Jared Kushner and Ivanka Trump with two of their children Arabella and Joseph. Neither the First Lady nor the President was spotted wearing their face masks as they did not stop for questions with the press as they boarded Air Force One.

The Pences had traveled to the space center ahead of the first family, where they toured the Kennedy Space Center, none of whom were wearing masks except for Ivanka’s children. Donald Trump was asked what his message was to the astronauts that were about to take off from American soil for the first time in nine years. “Good luck. God be with you. It’s a dangerous business, but they’re the best there is,” said the President.

However, despite the anticipation of the launch, NASA and SpaceX had to postpone the launch until Saturday due to unfavorable weather. The Trumps immediately departed from the launch site following the sudden postponement.

Despite the First Lady’s reiteration that Americans should wear a face mask when going to public places, during the Memorial Day event a few days prior, she was seen without a face mask when they appeared for the ceremonies. Along with foregoing a face mask during the ceremonies for Memorial Day, the First Lady also reportedly violated the social distancing guidelines by holding an aide’s hand who helped her step off the stage.

Her husband has famously refused to wear a face mask, and once stated that he did not want to give the media any satisfaction by wearing one in public. His opinion is in contrast to the First Lady’s who has spent the lockdown reiterating the CDC’s guidelines on slowing down the spread of the pandemic.