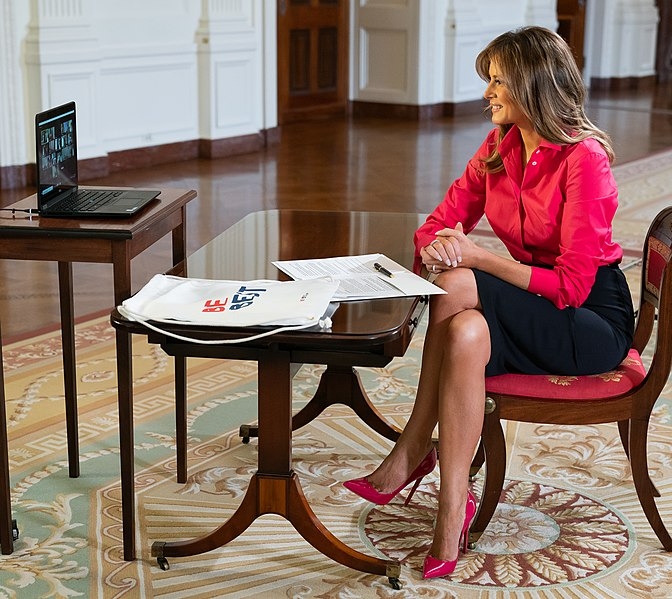 First Lady Melania Trump has a different approach to the coronavirus pandemic compared to her husband Donald Trump. On Thursday, Melania will be taking part in the global town hall to talk about the pandemic.

The Hill reports that the First Lady will be on CNN’s global town hall titled Coronavirus: Facts and Fears. This would be Melania’s first appearance on CNN since Trump was sworn into office in 2017. The network revealed that while her participation would be pre-recorded, Melania is expected to discuss how students have been affected by this pandemic by taking their classes online.

Contrary to the First Lady, Trump has often criticized CNN and called the network “Fake News,” and has never made appearances ever since his inauguration. His last appearance at CNN was back in 2016, during his presidential campaign bid. But Trump has praised Melania’s efforts in reaching out to Americans during the pandemic, saying that she has done a good job. Melania has often stressed the importance of wearing face masks in public spaces, as well as retweeting the guidelines and advice made by the CDC during the lockdown.

The First Lady has also sent care packages and packed lunches to hospitals as part of her Be Best initiative. Melania previously addressed those who are working on the frontlines of the pandemic to express her gratitude for their work. Several weeks prior, Melania reached out to her fellow first ladies to discuss the efforts their respective countries are making to combat the pandemic and affirm ties between their countries.

In other news, the Trump administration is known for foregoing several traditions and Melania is no exception. As the title of First Lady comes with certain customs, Melania has taken on the job and has skipped on some of them. One such instance is not accompanying her husband to the State of the Union address. During the address in 2018, Melania arrived without her husband to honor the guests she was sitting with during the event.

First Ladies also traditionally host state dinners at the White House. However, there was no state dinner back in 2017.