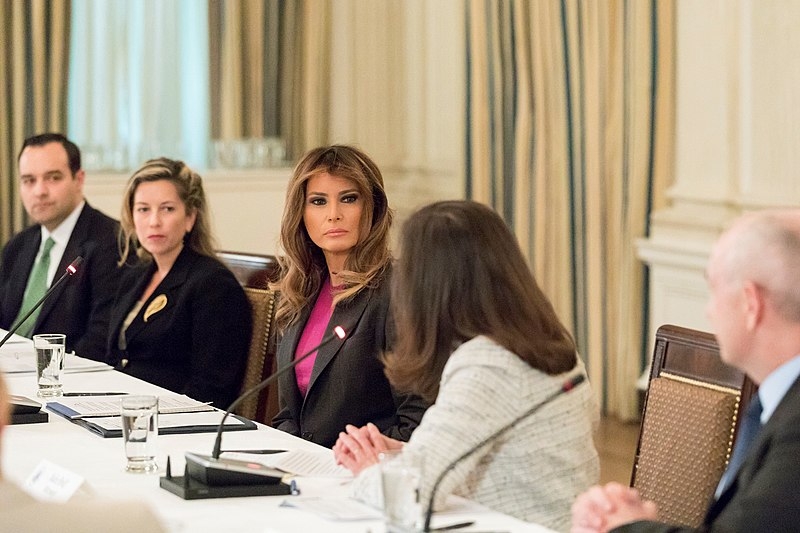 While former first lady Melania Trump has largely stayed out of the public eye since leaving office, her former chief of staff Stephanie Grisham recently spoke out. In Grisham’s upcoming tell-all book, she compared the now-former first lady to the French queen Marie Antoinette.

According to excerpts from the book titled “I’ll Take Your Questions Now: What I Saw in the Trump White House,” obtained by Politico, Grisham likens Mrs. Trump to Marie Antoinette, and also revealed that the former first lady also believed in her husband’s false election fraud claims. Grisham also revealed that during the January 6 insurrection at the Capitol, she sent the then-first lady a text message asking if she would like to condemn the violence that was going on. Mrs. Trump, who was reportedly in the middle of a photoshoot for a new rug she picked out, simply replied “No.”

The former chief of staff who also served as the Trump White House Press Secretary but never gave a briefing said that Mrs. Trump’s response to her regarding the Capitol insurrection “broke” her since she has staunchly defended the now-former first lady during her tenure at the White House. Grisham resigned from her post shortly after the insurrection and now, sees Mrs. Trump as similar to the French queen. “Dismissive. Defeated. Detached,” wrote Politico’s Daniel Lippman.

Prior to her resignation, Grisham also reportedly messaged Mrs. Trump if she should reach out to Dr. Jill Biden at the time to set up the inauguration tea. The former first lady then replied that she should see what is being done in the West Wing. “The reason, according to Grisham: Melania, like her husband, believed the election was illegitimate.”

Despite reportedly believing in her husband’s false claims of election fraud that has been widely refuted in the courts and by top officials, it does not seem that Mrs. Trump is still interested in returning to the duties of first lady compared to her husband who seems keen on returning to Washington. CNN reports that Mrs. Trump is not interested in her husband’s political aspirations and would not participate in the campaign if her twice-impeached husband made another bid for the presidency.

“Not unlike 2016, Melania Trump has no intention really of joining the campaign or being a prolific presence,” said CNN’s Kate Bennett. “I’ve spoken to people who said she’s not really even interested in being in the White House again, being first lady again.”