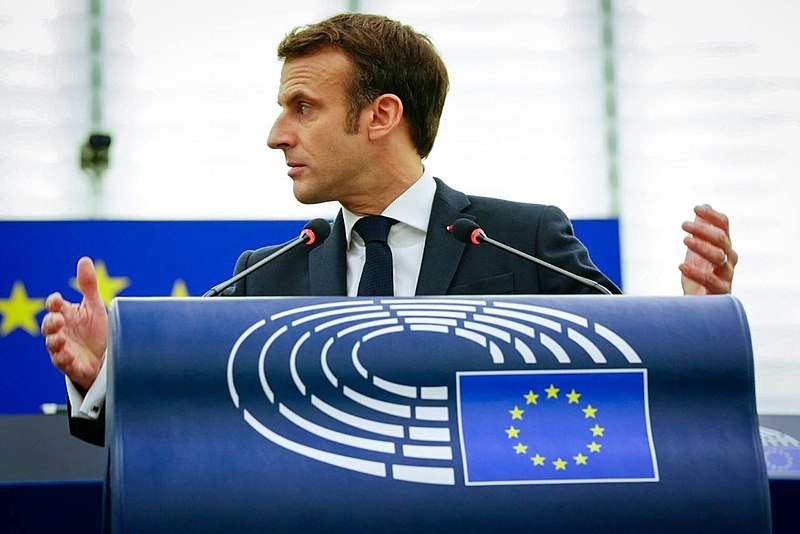 French President Emmanuel Macron sought to take a tougher stance in support of Ukraine as the war approaches its fourth month. In his visit to Romania, the French leader said Europe must make a strong show of support for Ukraine in this war.

Macron visited Romania Tuesday in a three-day engagement before he is expected to travel to Moldova and then to Kyiv along with German Chancellor Olaf Scholz and Italian Prime Minister Mario Draghi on Thursday.

The visit comes as Macron is looking to strengthen his stance and as French officials are seeking to put out a stronger message in support of Ukraine.

“We are at a point when we need to send clear political signals, us Europeans, towards Ukraine and its people when it is resisting heroically,” said Macron.

“We will do everything to stop Russia’s war forces, to help the Ukrainians and their army, and continue to negotiate,” Macron told French and NATO troops at a military base in Romania.

Macron has faced backlash from Ukraine and its allies in eastern Europe for what they see as his ambiguous support of Ukraine in the war. In recent weeks, the French leader has often said it was important not to “humiliate” Russia in order to find a diplomatic solution to end the conflict and has maintained open communication channels with the Kremlin.

In his joint news conference with Romanian President Klaus Iohannis, Macron downplayed the comments but noted that Ukraine, which he hopes will win the war, will eventually have to negotiate with Russia.

Ukraine has recently renewed its pleas for long-range weapons as the West is expected to provide more arms to level the battle. Canada’s defense minister said Wednesday that the country would provide Ukraine with $6.9 million in military assistance, including 10 replacement barrels for M77 howitzer artillery guns.

“We will continue to work around the clock to provide Ukraine with the comprehensive military aid that it needs to defend its sovereignty and security,” said defense minister Anita Anand in a statement.

Canada previously donated M77 howitzers to Ukraine, and replacement barrels are needed to maintain the distance range and accuracy.