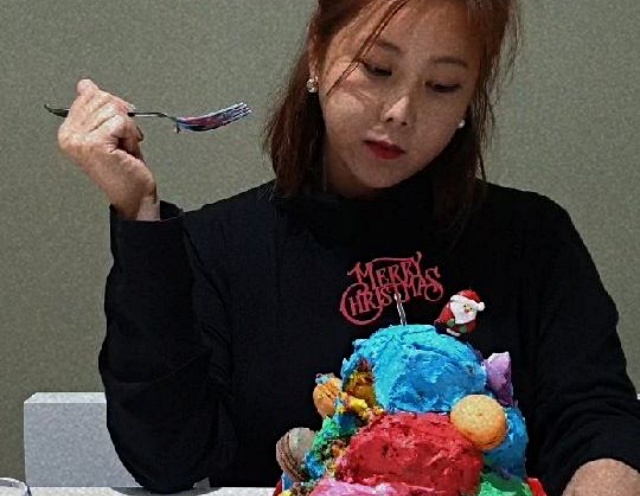 Solbi, a South Korean singer and artist whose real name is Kwon Ji An, is accused of plagiarism. It was reported that the colorful cake that she made and posted on her social media is actually a plagiarized work of art by a famous artist Jeff Koons.

As per Korea’s EDaily News, Solbi copied Koons’ Play-Doh sculpture. However, she faced criticisms after she posted a video of how she made the cake. Netizens are calling her a liar for saying that she did not plagiarize, for it’s only a cake.

On Dec. 28, Solbi uploaded a video of herself eating the cake she made. Prior to this video, she also shared photos while she was baking the dessert. The video was 10-minute long, and she could be seen opening the box containing the cake.

The clip ended with Solbi saying, “Just a cake, Seoul.” Apparently, this short comment made the netizens furious, and they claimed she lied when they found out that the design of Solbi’s cake looks exactly like the one made by Jeff Koons on Play-Doh.

After the backlash, Solbi explained that she made the cake for her own consumption and she has no intention of selling it. She also admitted that she used Koons’ artwork as inspiration but still, she was bashed by the angry netizens because they saw ads where she was selling the cake with her name as the seller.

Solbi is a known singer in Korea, and she can also paint and do some sculptures. She has already held several exhibits, and in fact, she recently held her first solo exhibition after a year of not releasing an artwork.

Korea Joongang Daily reported that her exhibit was titled "Paradise — Capturing of the Ordinary," and it was held from Sept. 29 to Nov. 22. Her artworks were displayed at Gyeonggi’s Vila Vila Cola, a cultural multiplex. She featured 20 of her most recent works in the exhibit.

Last year, she held her "Real Reality" exhibition and showcased her art ability once again to the public. Solbi has not been recording recently, and apparently, she is focusing more on being an artist.