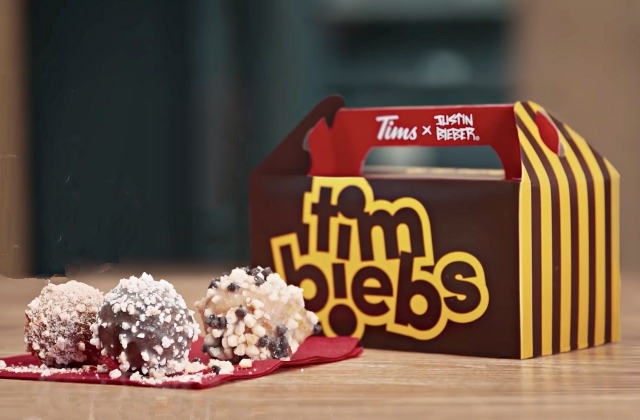 Tim Hortons and Justin Bieber have teamed up to release the new Timbiebs Timbits, which consists of new flavors for the coffee chain's donut holes treat. The Canadian company signed an exclusive partnership deal with the 27-year-old "What Do You Mean" singer to launch three new flavors in addition to some merchandise items.

The new Tim Hortons Timbiebs Timbits is coming at participating store outlets around the United States and Canada. It was reported that the launch had been set for Nov. 29, and they will be offered for a limited time only.

The limited-edition flavors of Timbieb Timbits are Birthday Cake Waffle, Chocolate White Fudge, and Sour Cream Chocolate Chip. The collaboration between Tim Hortons and Justin Bieber is just right as the singer is also a Canadian.

According to Chew Boom, Bieber was said to have participated in developing the interesting new flavors of Tim Hortons' Timbiebs Timbits. He reportedly worked with Chef Tallis Voakes, the coffee chain's director of culinary innovation, to experiment with various flavor combinations. The superstar singer was hands-on when he collaborated to create the recipes.

As mentioned earlier, Tim Hortons will also be dropping limited-edition merchandise as part of the Timbiebs promotional lineup. The details for this have not yet been made public, but fans can expect the company to post more information soon.

"What's amazing about working with Justin is he has an authentic, lifelong relationship with Tims and he was so invested in working on Timbiebs and our future plans together," Nation's Restaurant News quoted Tim Hortons' chief marketing officer, Hope Bagozzi, as saying in a statement. "He knows exactly what our guests already love about the Tims brand and he's helping us deliver new menu innovations that we know they're going to love. We're really looking forward to what's next."

Finally, as for Justin Bieber, he said that teaming up with Tim Hortons has always been his dream. He added that he grew up knowing and enjoying the coffee chain's products, and the brand has always been close to his heart.