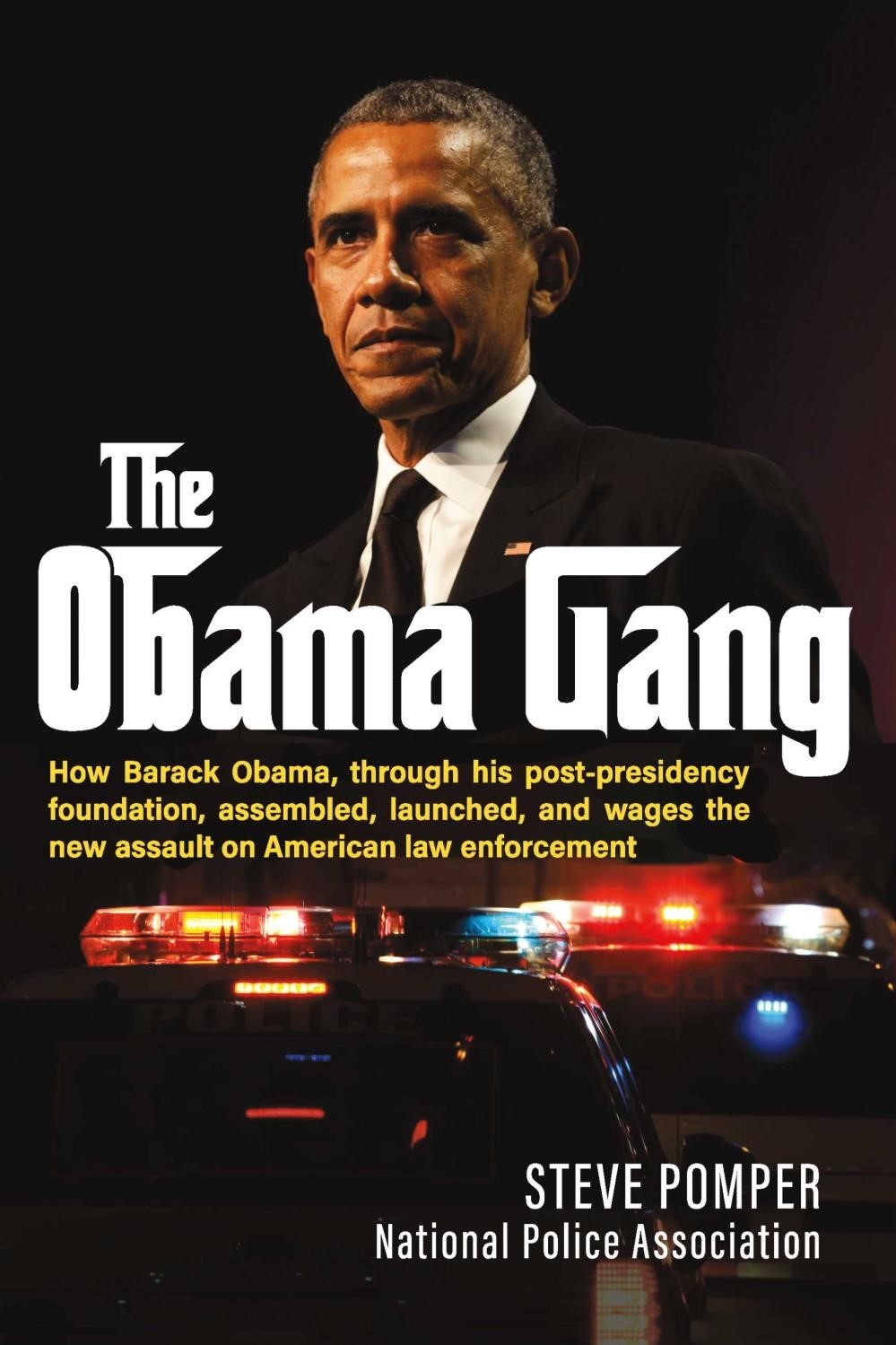 National Police Association’s Steve Pomper has written a new non-fiction work that exposes an underlying scheme to vilify law enforcement by former President Barack Obama’s Foundation. Pomper’s book, The Obama Gang, explains how the former president meticulously laid the groundwork for the nationwide anti-police movement seen through social movements like Black Lives Matter and Defund the Police. The book works to show how all of these seemingly spontaneous national gestures were indeed executed by the Obama Foundation’s web of allies.

The following are a series of questions Steve Pomper, author of The Obama Gang, answered for readers to give a bit more insight into his writing’s motive and truth.

What inspired you to write The Obama Gang?

Two things: 1. Pushback. It’s important for law enforcement and their supporters to pushback against the anti-police onslaught currently consuming our nation. A lie that goes unchallenged may as well be the truth. So, this book challenges the lies. 2. To educate people about just how involved and implicitly and explicitly coordinated President Obama (the Boss), his supporters (the gang), the web of organizations who fund the radicals, and those radicals (soldiers) committing violence in the streets, are with the anti-police movement.

When did Obama put this whole plan into motion?

I think Obama has had an anti-police bent at least since college, and it’s evolved (devolved) since then. Within months of taking office, he showed his anti-cop hand when he infamously said, “The Cambridge Police acted stupidly,” without having all the information. He also automatically injected racism into the incident with zero evidence except for the sergeant being white and the homeowner black.

Everyone remembers the Ferguson. Michael Brown incident where Obama’s DOJ (though I’m sure they didn’t want to) cleared Officer Darren Wilson of wrongdoing. However, at a town hall meeting soon after Ferguson, Obama told the audience, “I don’t think we’ll ever know what happened,” casting a shadow over the DOJ’s findings. This disrespected the officer and Obama’s own federal investigation.

During his administration, Obama unleashed his DOJ on local police departments. He quasi-federalized nearly two dozen American police departments by inflicting on them expensive, stifling, and morale-busting federal consent decrees. This included my department, which is one reason I retired ten years earlier than I might have.

In 2014, Obama created the Obama Foundation, setting things in motion for his post-presidency activism. That same year, through the Obama Foundation, he created My Brother’s Keeper Alliance (MBKA), which does some good work. However, that is not the case when it comes to law and order and law enforcement. Through something Obama calls the MBKA Pledge (Mafia translation: Omerta), he recruits leftist American mayors to take the pledge and then “reform” their police departments. Specifically, they pledge to do four things:

1. Review their police use of force policies.

2. Engage the community by collecting anecdotes about policing.

4. Reform police use of force policies.

You’ll notice two things lacking. First, the police are not included in this process. Second, there is a predetermined conclusion. #4 does not say, “if necessary,” or “if abuse is found,” then they’d recommend reform. In the case of the police, guilt is presumed.

Who are some of Obama’s major partners in crime? What are their roles in this ‘gang’?

The mafia comparison isn’t an exact one. We just thought it would be a more interesting and fun way to approach the project because for cops, what Obama and his gang are doing is organized crime. Though the various “Mafia” roles (except for the Boss) could be switched, I thought George Soros fit as the Underboss because he is the most infamous (Bond villain) character and due to his seeming omnipresence, an overlapping network of associations, and his massive financial resources. Eric Holder fits perfectly as Obama's Consigliere, since he served as the Boss's "Wingman."

What is Obama’s motivation behind stirring up this anti-police firestorm?

For the Left, including Barack Obama, in order to enact their socialist political agenda, they will need the police to enforce it. Obama’s anti-police efforts are aimed at weakening the public's view of law enforcement officers. By forcing traditional, conservative, and libertarian Americans out of law enforcement, he and his acolytes believe they can diminish agencies so the Left can more easily manipulate them. Also, we all know about the Left’s penchant for erasing American traditions, institutions, and history. And since law enforcement is one of the last remaining largely conservative American institutions, the Left is out to cancel traditional policing. Just imagine law enforcement as the Statue of Liberty (since the police are the guardians of liberty) with a rope around her neck, and the Left is trying its best to topple her.

What are one or two of the major events Obama’s Gang created to give rise to this anti-police movement?

Sorry, I have four: The Cambridge Police: "acted stupidly," Treyvon Martin: "If I had a son, he would have looked like Treyvon, Ferguson: "we may never know what happened...", and the John Lewis funeral speech: police "use tear gas and batons against peaceful demonstrators," which sprayed rocket fuel on the 2020 George Floyd riots.

Tell us a little bit about your professional history as a police officer.

I was a Seattle police officer for over 21 years, all in patrol, and except for four months, all at the infamous SPD East Precinct (formerly of CHOP/CHAZ fame). During my time with the SPD, I served as a field training officer (FTO), on the East Precinct Community Police Team (CPT), and as the East Precinct Mountain Bike Patrol coordinator. During my career, the week I served on the front lines of the 1999 WTO riots was the most significant experience of my career—though many more riots would follow. I also wrote frequently in the police union newspaper, advocating for the rank and file and often critical of the city’s political indoctrination of its cops.

What is your relationship with the National Police Association?

The NPA invited me to become a contributor at Nationalpolice.org. I write two articles per week and fulfill special assignments as they arise. I occasionally write addendums to law enforcement-supporting amicus briefs the NPA files in various courts across the U.S. I also serve as a national spokesperson appearing on various media. And now I’ve written a book with the National Police Association, The Obama Gang.

How did your work with NPA benefit you in telling this story?

The National Police Association’s prime directive is to help educate people to better assist the police in completing their public safety mission. Writing articles in support of this mission has allowed me to conduct research in areas I might not have looked at so closely. The NPA is also dedicated to responding to anti-police individuals and groups (Obama et. al., Antifa, and BLM etc.) that inhibit the cops’ ability to do their jobs properly.

What do we do to help the National Police Association in preventing these things from happening?

Well, donating cash goes without saying (even though I just said it). But I’d say the next most important thing is to learn about what, how, and why police do their work, so you can pass that knowledge on to your friends and family. So often, after a "controversial" incident, even police supporters get it wrong, or they fail to give officers the benefit of the doubt they’ve earned and deserve. A tip: police use of force rarely "looks good." Arresting violent criminals is a dangerous and messy business that most people have no interest in doing. Communities are fortunate there are Americans willing to risk their health, safety, and lives to protect strangers.

What do you hope will happen by publishing this book for the public?

To bring more public awareness to the myths, lies, and false narratives the Left uses to attack American law enforcement officers. Police officers today are some of the best-trained cops this nation has ever had, and studies repeatedly show this. The Force Science Institute research has found that cops are surprisingly hesitant to use force—especially deadly force. To put forth American cops are “hunting black men in the streets” or even going so far as to say cops are “committing genocide against black people,” is not only insulting but also ludicrous and unsupported by the facts. People need to understand the difficult nature of police work and stop being lazy thinkers when it comes to how they view the police. You talk to a cop about a controversial incident, and he or she will tell you something you did not know that will make you rethink the incident, guaranteed.

What steps are you taking now to help prevent Obama’s Gang from gaining more power?

Through the National Police Association’s continuing efforts at nationalpolice.org to educate the public about police work, by providing legal assistance and other support to officers and agencies across the nation. By publishing The Obama Gang, which is a form of sunlight being used as an effective disinfectant against anti-cop lies, myths, and false narratives. Again, a lie that goes unchallenged may as well be the truth. The book exposes the coordinated assault on traditional American policing and, further, pushes back against it. As people gain information, they gain power. For example, two candidates for the Seattle City Council, one of the cities most plagued with leftist militant violence, only a year previous, campaigned on hiring more police officers. Fast forward to 2020 and a death in police custody that occurred 2,000 miles away. Suddenly, those same city council members support defunding the same police department.

National Police Association has published The Obama Gang, which is now available for purchase digitally at Amazon.com and other online booksellers, including bookbaby.com. The paperback version is available for preorders with a ship date of April 14th, 2021.

A big thanks to the author of The Obama Gang, Steve Pomper, for taking the time to share with us!