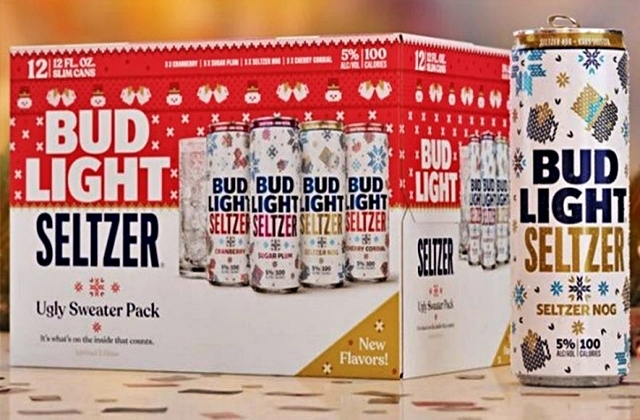 Bud Light Seltzer announced the return of its Ugly Sweater Limited Edition Variety Pack, and this year, it will be offering new holiday-inspired flavors. Four new tastes are set to hit the grocery store shelves soon.

As mentioned on Fox Business, Bud Light Seltzer’s holiday flavors for 2021 will include the eggnog flavor that is commonly present during the festive time of the year in the U.S. In fact, the national eggnog day in the country is observed every year on Christmas Eve, which is Dec. 24.

The other three new Bud Light Seltzer flavors are the Sugar Plum, Cherry Cordial, and Cranberry, which is a crowd favorite. The eggnog flavored is dubbed the Seltzer Nog.

Bud Light launched its Ugly Sweater Pack for the first time last year. It was unveiled at that time as part of its hard seltzer line-up for Christmas. For this year, the company has come up with new flavors except for the Cranberry Hard Seltzer, which was already available since the debut of the products.

“With our core focus on innovation and flavor, Bud Light Seltzer continues to bring ‘The Loudest Flavors’ in the industry with great-tasting products that deliver fans the perfect seltzer for every occasion,” Bud Light’s vice president of marketing, Andy Goeler, said in a press release. “After launching our first-ever Ugly Sweater pack last year to rave reviews, there was never a doubt that we were going to bring it back this year, adding new, festive flavors to help fans make this holiday season even more memorable and fun.”

For the curious ones, the new Bud Light Seltzer Nog was described to taste like a combination of sweet cinnamon and vanilla. The mixture was made perfect by the bubbliness of a seltzer.

Finally, customers can buy the Bud Light Seltzer holiday variety pack starting Nov. 1. They can be purchased in grocery stores, and each box contains 12 slim cans of 12 oz. drinks. Each can have 100 calories and five percent alcohol by volume, and the packs will be available across the U.S.