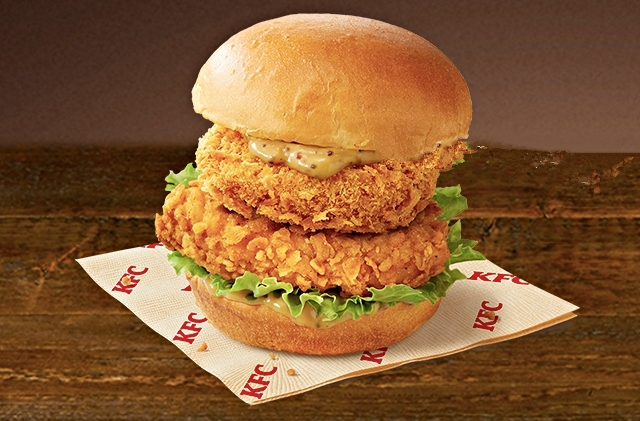 KFC Japan just dropped a new sandwich, and it features two crispy fried chicken in a bun. The fast-food chain added the new Fillet & Cutlet Sandwich to the menu, and it boasts an exclusive Japanese flavor.

As posted on FoodBeast, the new chicken sandwich offered in KFC Japan’s participating outlets has two kinds of fried chickens. One is the regular signature fillet, and the other is a fried chicken menchi katsu that was described as a deep-fried breaded chicken patty made from grounded chicken meat. The patty has been seasoned with 11 types of herbs and spices, so customers can enjoy full flavors in every bite.

The new KFC Fillet & Cutlet Sandwich is completed with the addition of fresh lettuce, a mayo dressing made with arabiki whole grain mustard, pepper, and garlic. Customers can only get them at participating locations around Japan for a limited time only. Chew Boom reported that diners could opt to buy the new sandwich item a la carte for ¥490 (around $4.27) or opt for the meal option that has fries and drink for ¥790, or about $6.88.

At any rate, it was early this month when it was first reported that KFC Japan was releasing a new sandwich, and at that time, the reports stated it is called the Chicken Fillet and Menchi Katsu Sandwich. Menchi katsu is a minced meat cutlet that is really popular in Japan, and KFC just gave it a try as well.

According to Sora News24, when one orders the KFC Fillet & Cutlet Sandwich, it will be served in a surprisingly tall box. This was understandable as the layers of buns, chicken fillet, the menchi katsu, and toppings created a towering height.

The star of the sandwich - the menchi katsu patty is said to be very thick, and the juicy fried chicken fillet is just as thick. Thus, the new sandwich that KFC Japan introduced is already a complete filling meal in itself.

Even for the Japanese, eating fried chicken fillet and menchi katsu together is something that most people have never tried before, and those who already had the chance to buy the KFC Fillet & Cutlet Sandwich attested that it was an awesome combination. Finally, KFC Japan customers can also order the menchi katsu in rice bowls, but they prefer this over buns.