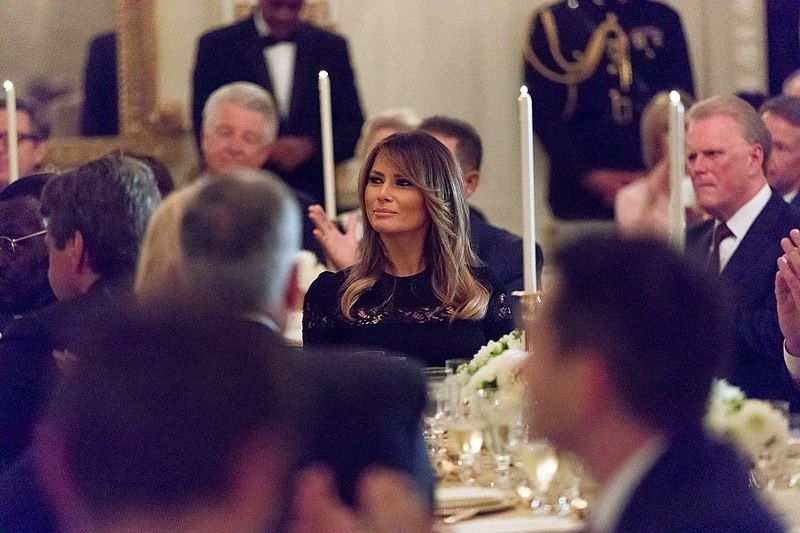 The United States First Lady has been making headlines earlier this week after a video of her and President Donald Trump’s church visit. Reports and netizens claim that during a photo op with the press, he seemingly instructed his wife to smile for the cameras, to which he purportedly gave out a not-so convincing smile.

America’s first couple visited the Saint John Paul II National Shrine in Washington, D.C., on Tuesday. A video of the photo op at the said location went viral after Donald Trump seemingly told her wife to smile. Melania Trump responded with a very quick smile – did not last for a full second – and this exchange has once again set the people speculating on the real nature of their relationship. Meanwhile, the Trumps’ body language during the event has been scrutinized by experts.

Melania Trump and Donald Trump’s expressions at the Tuesday church photo op were called “lightning smiles” by body language expert Judi James, in an interview with Mirror. James explained that these smiles are done quickly and are not coming from “genuine pleasure or happiness.”

James also recalled Melania Trump giving the same kind of smile during Donald Trump’s inauguration in early 2017. This one was also caught on camera and has become a very popular GIF passed around on social media. As for Donald Trump, who appeared more cheery during the photo op, James explained, “For a business alpha it can be important to look confident and relaxed at times of crisis as to show weakness can make you vulnerable.”

Melania Trump shared photos from the said church visit, where she gained more positive responses from her Twitter followers. One netizen said she is a “beautiful First Lady” and added they should stay in the White House for four more years.

The church visit itself had been quite controversial. Reports have it that U.S. Park Police dispersed protesters with tear gas at Lafayette Square so the Trumps’ convoy could pass through to get to St. John’s Church. Meanwhile, White House spokesperson Judd Deere later claimed that the police issued three warnings before the aggressive dispersal.

.@WashArchbishop Gregory has released a statement on the president's visit to the Saint John Paul II National Shrine.https://t.co/46g9Ac8Wy5 pic.twitter.com/d1wERIoLVp

Later, Washington Archbishop Wilton D. Gregory spoke out against the incident and the Trumps’ appearance at the shrine. Arch. Gregory pointed out that St. Pope John Paul II was a “defender of human rights” and that he would not have agreed with clearing out protesters with the use of tear gas for a mere church photo op.