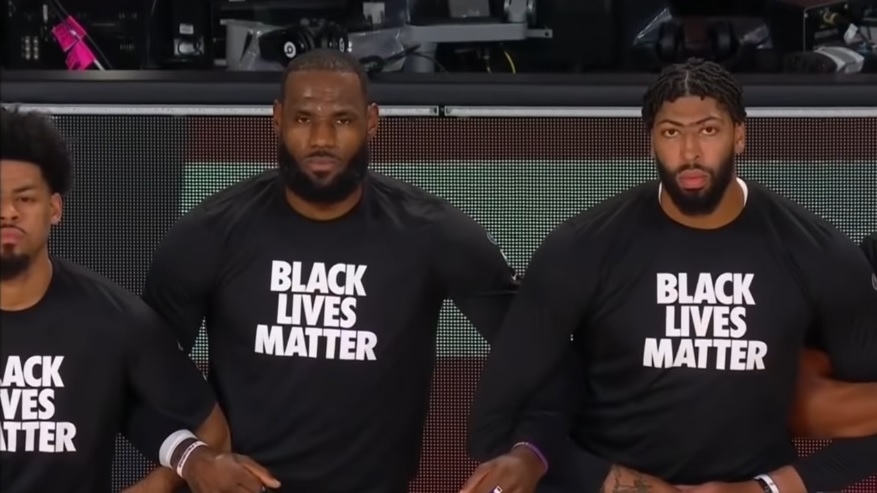 LeBron James and Anthony Davis join the rest of the Clippers and Lakers as they kneel during the National Anthem in support of the Black Lives Matter protests. | Photo credit: NBA / YouTube screenshot

Following a series of protests in the NBA Orlando bubble, players still in the playoffs have reportedly decided to finish the season. However, LeBron James was said to be one of those opposed to that decision along with the rest of the Los Angeles Lakers and Los Angeles Clippers.

NBA playoffs 2020 will continue but not with a unanimous vote, report says

Major sports leagues across the United States have had their schedules postponed this week as athletes decided to stage protests and not attend their games. It is their way of showing solidarity to the growing Black Lives Matter protest following a shooting incident in Kenosha, Wisconsin that put 29-year-old African American man, Jacob Blake, in the hospital

Blake was shot multiple times while police officers were reportedly attempting to arrest him. Video footage that went viral shows Blake walking into his car when a responding police officer -- later identified as Rusten Sheskey -- fired seven shots at Blake’s back. His children were also said to be in the backseat of the car at the time. Blake is currently recovering in the hospital, but the shooting has paralyzed him.

The Milwaukee Bucks was the first team to not attend their scheduled playoff game against the Orlando Magic on Wednesday. Other NBA teams later made the same decision obliging the league to reschedule. These protests within the Orlando bubble were reportedly followed by a meeting attended by players still in the NBA playoffs. One of the main topics to be discussed: should they continue playing or ditch the playoffs.

Sources: Miami's Udonis Haslem spoke and essentially told everyone in room that -- without Lakers and Clippers, how will season continue?

LeBron James walked out. Rest of Lakers and Clippers exited behind him.

Shams Charania reported that the LA Lakers and LA Clippers were the only teams to vote in favor of ending the season, which says something considering they are the two top-seeded organizations in the Western Conference. Emotions were apparently high during the said meeting with James purportedly walking out and the “rest of Lakers and Clippers exited behind him.”

The new schedule for the next NBA playoff games has yet to be confirmed. But the league already issued a statement that implies the season is more likely to resume.

“NBA playoff games for today will not be played as scheduled,” NBA Executive Vice President Mike Bass said in a statement on Thursday. “We are hopeful to resume games either Friday or Saturday.”