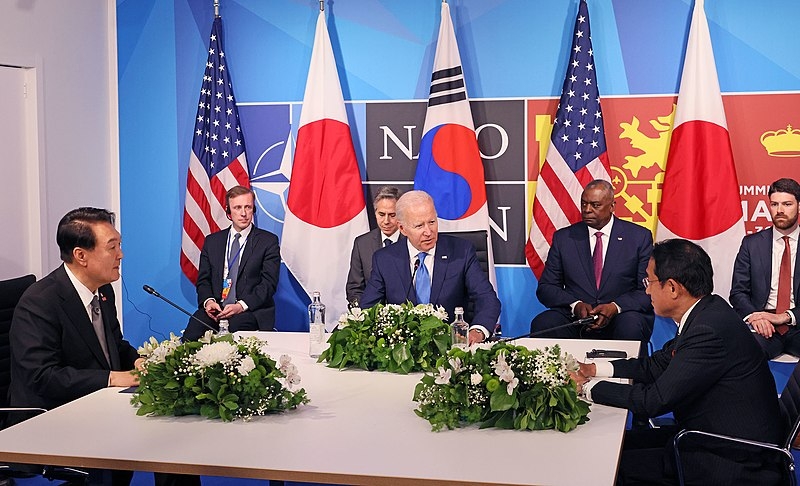 South Korean President Yoon Suk-yeol has urged the country to overcome its historical conflicts with Japan this week. Marking the anniversary of the end of Japan’s rule over the Korean peninsula, Yoon also reiterated the promise of providing aid to North Korea in exchange for its denuclearization.

In his remarks at a ceremony commemorating the end of Japan’s occupation of the Korean peninsula in 1945, Yoon said Japan has become a partner in addressing global threats and urged the two countries to resolve their disputes that go back to the occupation.

“When Korea-Japan relations move towards a common future and when the mission of our times align, based on our shared universal values, it will also help us solve the historical problems,” said Yoon, who took office in May and has pledged to improve relations with Japan.

Yoon also repeated his pledge to provide North Korea with aid if Pyongyang stopped the development of its nuclear program and underwent a “genuine and substantive” process of eliminating nuclear weapons.

“We will implement a large-scale food program; provide assistance for power generation, transmission, and distribution infrastructure; and carry out projects to modernize ports and airports for international trade,” said Yoon.

Yoon added in the English translation of his speech that South Korea is ready to bolster North Korea’s farming productivity, modernize hospitals and medical facilities, and take steps toward international investment and financial support.

Both North Korea and South Korea remain to be at war as the 1950-1953 conflict ended in a truce instead of a peace treaty.

With concerns that North Korea is set to carry out its first nuclear test in five years following its multiple weapon tests so far this year, the Pentagon said in a statement Monday that South Korea, Japan, and the US took part in a joint missile warning and ballistic missile search and tracking exercise off the coast of Hawaii.

The drills took place from August 8 to 14 and showed the commitment of the three countries to respond to the challenges posed by Pyongyang, while protecting shared security and upholding the rules-based international order, according to the statement.