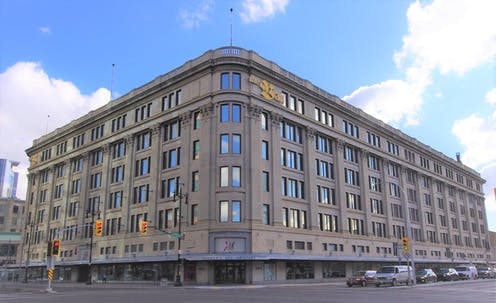 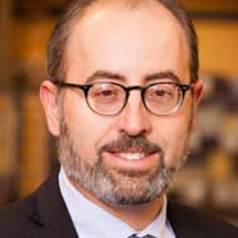 Over the past year, cities have become remarkably different places. The response to the ongoing coronavirus pandemic has resulted in less active public and shared spaces like parks, malls, streets and retail.

In most cities, the downtown business area remains an important centre of entertainment, commerce and retail. These areas have been hard hit by the ongoing pandemic, and much has been written about what might come next. Some suggestions include converting empty office towers into apartments or rethinking high density housing and other activities that draw large crowds.

One thing that has become clear is that the retail landscape in downtown areas will look even more different in the coming years. This will include losing more department stores, which have struggled to remain relevant.

Retail in the North American downtown has been under threat for decades from changing urban development and consumer habits that have also been hard hit from the pandemic. The recent explosion of online shopping merely continued the previous impact of the 1950s suburban growth: massive malls and retail clusters serviced growing populations that lived further from the traditional core of the city. This shift, combined with the big box store revolution of the 1980s, ended the role of downtown as the primary retail destination for shoppers. 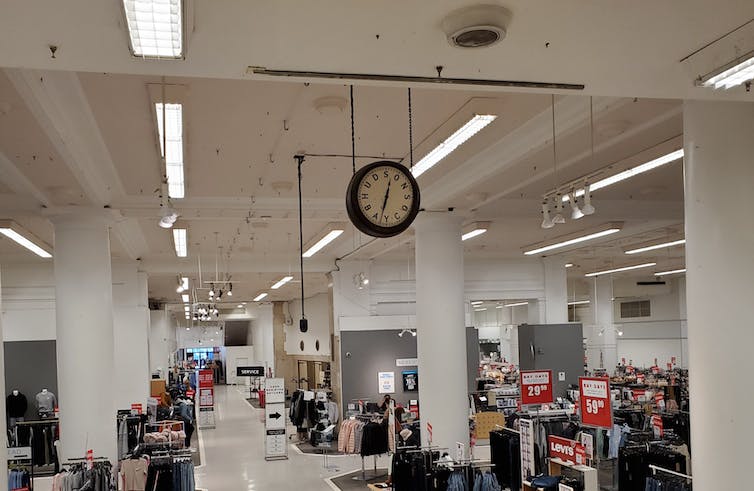 Discounted merchandise at the Bay in Winnipeg, which is the city’s last remaining downtown department store. (Jino Distasio), Author provided

In response, there has been a sustained effort by planners to reinvent the downtown, but with limited success. This has included a variety of schemes from pedestrian malls, covered malls, elevated walkways and other retail models designed to entice people back downtown to shop.

The history of the department store

Department stores first appeared in the mid-1800s. They disrupted the retail industry by pulling people off the streets and into multilevel wonderlands. And for more than 150 years, the department store’s reign in the downtown was second to none.

Department stores were so much more than shopping: they were destinations where people met, gathered and socialized. They were also exclusive spaces, with lavish displays and architectural designs that offered an escape from the ordinary.

The Hudson’s Bay Company has a complex history related to profiting from and exploiting Indigenous communities in Manitoba and the rest of Canada. Native studies scholar Niigaan Sinclair suggested using the soon-to-be-empty building to address that history, and envisioned as a place that could bring community together: “Let’s make Winnipeg’s most non-Indigenous space Indigenous space. Let’s make it a place where our community can renew, change and enter the next 350 years of our lives together.”

At its height, Eaton’s had eight floors of shopping and a massive complex of buildings that included a nearby annex for mail orders that totalled over almost 14 thousand square metres of space. A trip to Eaton’s wasn’t just about making purchases, it was a day-long excursion.

Twenty years later, when the Hudson’s Bay store opened up further along Portage Avenue in 1926, Winnipeg had become Canada’s third-largest city. It had a thriving economy that was propelled by a 40-year boom that saw people and businesses flock to the city.

Downtown Winnipeg, like most North American cities, was the epicentre of retail and commerce. It attracted the majority of shoppers and workers, who travelled by streetcar from all over the city. The positioning of these two department stores along Portage Avenue created an important retail corridor that was linked by street level retail.

Starting in the 1930s, Winnipeg tumbled to a place of pronounced economic and social desperation by the 1960s. For the department stores, their massive statures began to represent a disappearing symbol of a bygone era. This came as suburban shopping malls began to spring up with dozens of American retail chain stores and a sea of free parking. Downtown simply became a less desirable destination.

Winnipeg was not unique in struggling to deal with decline in the downtown. Significant attempts to revive retail were made throughout the 1980s to halt urban decay. Malls were built and millions invested, but this did not work.

The failure of the downtown mall became a sore spot for many planners who felt downtown retail could be resuscitated.

By the late 1990s, the first titan of Canadian retail fell as the Eaton’s empire crumbled. For many cities, the result was the closure of many anchor stores in malls and downtown. And since then, the retail sector has continued to face challenges, especially in downtown areas.

Cities will remain the engines of the global economy with the downtown being the place to escape. In the words of British singer Petula Clark:

Just listen to the music of the traffic in the city

Linger on the sidewalk where the neon signs are pretty

How can you lose?

If the past is an indication of the future, cities will recover. People will return to the downtown as it transforms from retail into homes, places of work, museums, art stores and gathering places.

For those of us who remember the spirit of these old places, we will reminisce over coffee, as we’ve been doing for decades perhaps just in a smaller space.