Paws for thought: the pros and cons of a pet-friendly office 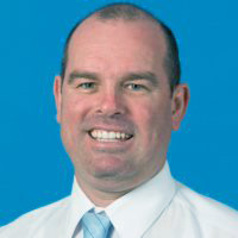 Recent high-profile criminal cases, such as the suspected death of William Tyrrell and the abduction of Chloe Smith, have captured the attention of the media and the public.

As a former detective inspector, I investigated and managed more than 25 homicide investigations and many other major crimes during 28 years with the Queensland Police Service.

The difference between major crime and volume crime

Homicides are the most obvious type of major crime, but it can also include robbery, rape and other serious offences such as organised crime.

The Australian Institute of Criminology defines volume crime as offences that account for the largest proportion of crime recorded by the police. These include unlawful entry, assaults, motor vehicle theft and theft.

There is a difference between the way major crime and volume crime are investigated. Major crime investigations can take years for some cases, such as the murder of 13-year-old Daniel Morcombe, which took 11 years to reach a conviction.

In major crime, there is a clear division of labour rather then just one officer doing everything, as is usually the case in volume crime investigations. Assigned roles include the investigation manager, the arrest team, other investigators, an intelligence cell and specialist support staff.

Usually, a major incident room is set up.

Clear up rates for major crime

This ability to put greater investigative effort and specialist support into major crime investigations contributes to much higher “clear-up rates” – when a suspect is identified and proceedings are begun – for these types of offences.

A New South Wales study showed that, from 2007 to 2016, 65% of murders were cleared by police within 90 days. The same study noted clear-up rates for property offences were much lower than for violent offences, including murder. In Queensland, 96% of murders reported in 2019–20 were cleared. 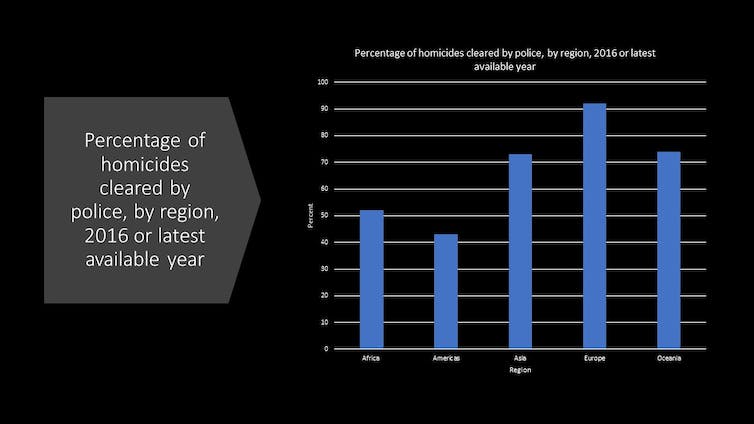 Percentage of homicides cleared by police, by region, 2016 or latest available year. United Nations Office of Drugs and Crime

The hunt for information

Most major investigations are a process of moving from having little information about the crime to having a lot. It is essentially an exercise in information management. Investigators need to acquire information to build a plausible account of what has happened.

Investigators do this by identifying, interpreting and assembling information into a form that shows whether a crime has been committed, and who is responsible for that crime. Sources of information can include crime scene material, intelligence databases, witnesses, victims and the media.

There is no standardised investigative process or model. The United Nations Office of Drugs and Crime provides some guidance on how to progress through a generic reactive investigation in its crime investigation toolkit.

In the United Kingdom, the College of Policing provides guidance on the investigative process. However, it notes that every investigation is different, and so may require a different path to solving the case.

In 2001, as part of a research project in conjunction with the Queensland Police Service, I developed an investigative model. It outlined several stages:

In the course of an investigation, police can return to any stage and begin a new line of inquiry. We have seen this occur with the disappearance of William Tyrrell, with police returning to the original crime scene some seven years later after receiving new information.

No matter what model is used, there are decisions that the management team of the investigation will need to make as it moves through the stages:

The role of media and technology

The media are a great investigative tool and can be used to apply tactical pressure to suspects and drive the search for information from the public. The extensive coverage of high-profile cases, such as that of William Tyrrell, is an example of this. The use of the media can also coincide with covert policing strategies, such as listening devices, designed to target potential suspects.

Technology is now also playing a much larger role in major investigations. We all leave digital footprints, be they passive (your mobile phone searching for a signal from a cell tower) or active (using your phone to pay for fuel at a geographic location).

In one triple-murder investigation that I managed, the offenders were tracked up and down the eastern seaboard of Australia, and to the murder scenes, using their mobile phone data.

One thing that hasn’t changed over time is the importance of the investigative effort in the early stages of any major crime, but particularly murders. I have seen first-hand how putting the effort in early in terms of long hours and adequate resources can result in solving major crime.