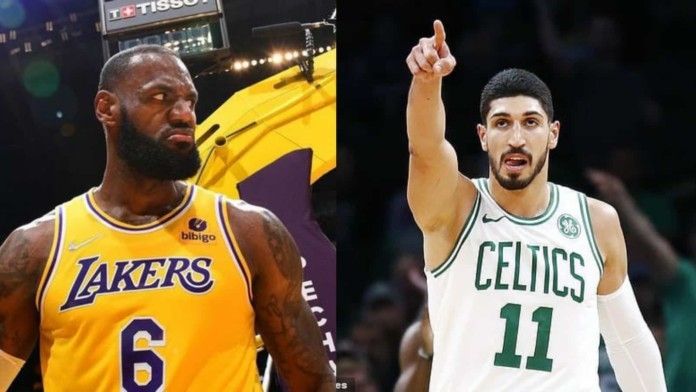 Boston Celtics center Enes Kanter Freedom said he is willing to speak with LeBron James about the criticisms he made on the latter for his sponsorship deal with Nike and silence on China's human rights issues.

Freedom added that he wants to educate and help James because it's not just about money but also about morals, principles, and values.

However, James claimed Freedom avoided him when they recently crossed paths.

Freedom denied the claim, saying it was James who avoided the interaction.

Freedom called Nike "the biggest hypocrite company out there" for its unwillingness to speak out on China's human rights violations.

Nike insists that it does not source products from the Xinjiang region and that there is no evidence of the employment of Uyghurs in its supply chain in China.

Freedom has also been wearing and promoting custom shoes with images of James being crowned by Chinese President Xi Jinping.

James said that Freedom is using his name to create opportunities for himself and that he would not give his energy to the Celtics player.

The Turkish-born basketball player was known as Enes Kanter until he became a U.S. citizen Monday and changed his last name to Freedom.