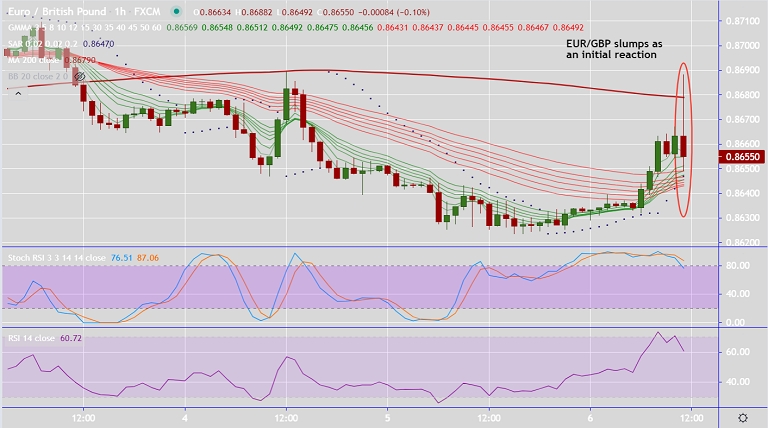 The pair saw volatile moves around 55-EMA as an immediate reaction after the Bank of England's (BoE) Monetary Policy Committee (MPC) left the benchmark interest rate unchanged at 0.10% at its May policy meeting.

The central bank also kept the Asset Purchase Facility steady at £895 billion as widely expected, with no mention of taper.

Improved economic projections support the pound, dragging the pair lower as we write. But uncertainty over the outcome of the Scottish parliament election remains a headwind for the sterling.

On the other side, data released earlier on Thursday showed Retail Sales in the broader Euroland expanded at a monthly 2.7% in March and 12% from a year earlier.

The readings were better than consensus estimates pointing to a 1.5% and 9.6% growth, respectively.

Improved growth outlook in the euro area amid successful vaccine campaigns is likely to keep the single currency supported.

Technical bias for the pair is biased lower. Failure to hold above 55-EMA will see further weakness.