How SpaceX lowered costs and reduced barriers to space 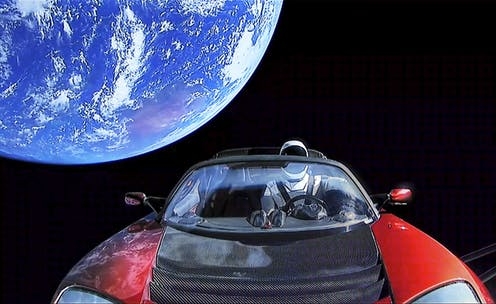 Minutes after launching the Falcon Heavy rocket, SpaceX was livestreaming footage from the Tesla Roadster it released into space. SpaceX, CC BY-NC-SA

While a major milestone for a private company, SpaceX’s most significant achievement has been in lowering the launch costs that have limited many space activities. While making several modifications to the fuel and engines, SpaceX’s major breakthroughs have come through recovering and reusing as much of the rocket and launch vehicle as possible.

I’m a space policy analyst, and I’ve observed that cost has been a major hurdle limiting access to space. Since the 1950s, the high cost of a space program has traditionally put it beyond the reach of most countries. Today, state and private actors alike have ready access to space. And while SpaceX is not the only private company providing launch services – Orbital ATK, recently purchased by Northrop Grumman, United Launch Alliance and Jeff Bezos’s Blue Origin are also players – it has emerged as the most significant.

Frustrated with NASA and influenced by science fiction writers, Elon Musk founded SpaceX in 2002. Though it suffered several setbacks, in 2008 it launched the first privately funded liquid-fueled rocket, the Falcon 1. Falcon 9 flew for the first time the next year, and in 2012, the Dragon capsule became the first privately funded spacecraft to dock with the ISS. SpaceX has since focused on recovering key parts of the Falcon 9 to enhance reusability and reduce costs. This includes the Falcon 9’s first stage which, once it expends its fuel, falls back through the atmosphere reaching speeds of 5,200 miles per hour before reigniting its engines to land on a drone recovery ship.

In 2018 alone, SpaceX made 21 successful launches. The new Falcon Heavy rocket – a more powerful version of the Falcon 9 – launched in February. This rocket can lift 63,800 kilograms, equivalent to more than 27 Asian elephants, to low Earth orbit and 16,800 kilograms to Mars for just $90 million. The test payload was Musk’s own red Tesla Roadster, with a mannequin named Starman in the driver’s seat.

In addition to the crewed Dragon tests this year, SpaceX is continuing development of its Starship, which will be designed to travel through the solar system and carry up to 100 passengers sometime in the 2020s. Musk has also suggested that the Starship could serve as the foundation for a lunar base.

SpaceX’s technical advances and cost reductions have changed the direction of U.S. space policy. In 2010, the Obama administration moved away from NASA’s Constellation program, which called for the development of a family of rockets that could reach low Earth orbit and be used for long-distance spaceflight. With NASA falling significantly behind schedule, because of technological difficulties and budget cuts, the Obama administration was left with a choice of whether to boost funds for NASA or change direction.

SpaceX’s Falcon Heavy first stage falls back to Earth and is reused to boost cost savings.

In 2010, then-President Barack Obama toured Kennedy Space Center and even met with Elon Musk to get a firsthand look at SpaceX’s facilities. The administration chose to reorient the program to focus solely on deep space. For missions closer to home, NASA would purchase services from companies like SpaceX for access to low Earth orbit. Critics objected to budget cuts to NASA as well as concerns about whether the private sector would be able to follow through on providing launch services.

While NASA has struggled to develop its Space Launch System, an analysis from NASA’s Ames Research Center found that the dramatically lower launch costs SpaceX made possible offered “greatly expanded opportunities to exploit space” for many users including NASA. The report also suggested that NASA could increase its number of planned missions to low Earth orbit and the ISS precisely because of the lower price tag.

In addition to substantially affecting human spaceflight, SpaceX has also launched payloads for countries including Kazakhstan, Bangladesh, Indonesia and, most recently, Israel. On Feb. 21, 2019, a Falcon 9 launched a privately built Israeli lunar lander which, if successful, will be the first privately built lunar probe.

Overall, SpaceX has significantly reduced the barriers to space, making it more accessible and democratizing who participates in space-based commerce and exploration.

Despite SpaceX’s successes, it faces significant challenges. Earlier this year, SpaceX laid off 10 percent of its workforce to reduce costs. NASA remains suspicious of some of the launch procedures SpaceX plans to use, including the fueling of the rocket with astronauts on board, which was linked to an explosion of a Falcon 9 on the launchpad. The Department of Defense’s inspector general has also announced an investigation into how the Air Force certified the Falcon 9, though it is not clear what initiated the probe.

Among some in NASA, the concern is with Musk himself. In a video last year, Musk was seen smoking marijuana, which prompted NASA to initiate a safety review of SpaceX as well as Boeing, another company aiming to provide launch services. Musk has also found himself in hot water with the U.S. Securities and Exchange Commission regarding his tweets about another one of his companies, Tesla. In recent days, the SEC has asked a judge to hold Musk in contempt for apparently violating a settlement deal reached last year. While he is undoubtedly the driving force behind both Tesla and SpaceX, erratic behavior could make potential customers wary of contracting with them.

Musk, regardless of his personal missteps, and SpaceX have aggressively pushed technological boundaries that have changed minds, my own included, about the potential of private companies to provide safe and reliable access to space.