We trained AI to recognise footprints, but it won't replace forensic experts yet 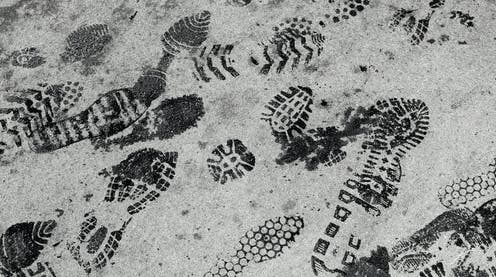 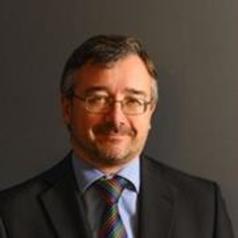 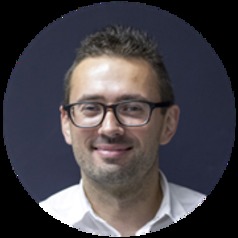 We rely on experts all the time. If you need financial advice, you ask an expert. If you are sick, you visit a doctor, and as a juror you may listen to an expert witness. In the future, however, artificial intelligence (AI) might replace many of these people.

In forensic science, the expert witness plays a vital role. Lawyers seek them out for their analysis and opinion on specialist evidence. But experts are human, with all their failings, and the role of expert witnesses has frequently been linked to miscarriages of justice.

We’ve been investigating the potential for AI to study evidence in forensic science. In two recent papers, we found AI was better at assessing footprints than general forensic scientists, but not better than specific footprint experts.

What’s in a footprint?

As you walk around your home barefoot you leave footprints, as indentations in your carpet or as residue from your feet. Bloody footprints are common at violent crime scenes. They allow investigators to reconstruct events and perhaps profile an unknown suspect.

Shoe prints are one of the most common types of evidence, especially at domestic burglaries. These traces are recovered from windowsills, doors, toilet seats and floors and may be visible to or hidden from the naked eye. In the UK, recovered marks are analysed by police forces and used to search a database of footwear patterns.

The size of barefoot prints can tell you about a suspect’s height, weight, and even gender. In a recent study, we asked an expert podiatrist to determine the gender of a bunch of footprints and they got it right just over 50% of the time. We then created a neural network, a form of AI, and asked it to do the same thing. It got it right around 90% of the time. What’s more, much to our surprise, it could also assign an age to the track-maker at least to the nearest decade. 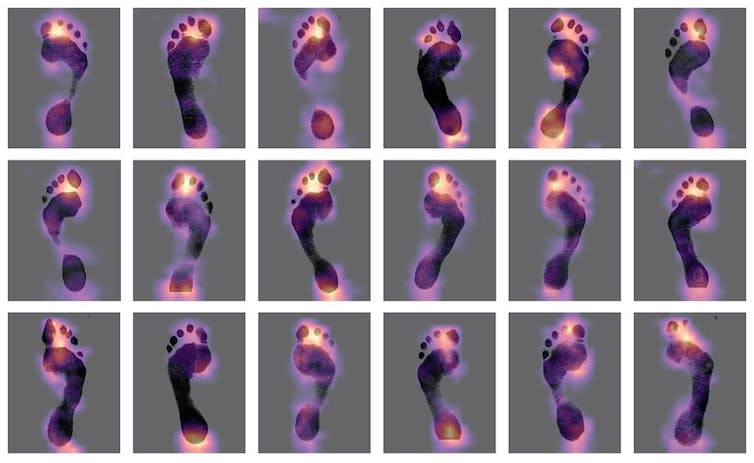 The footprints analysed by the Bluestar AI, with a heat map over them suggesting areas of ambiguity. Matthew Bennett, Author provided

When it comes to shoe prints, footwear experts can identify the make and model of a shoe simply by experience – it’s second nature to these experts and mistakes are rare. Anecdotally, we’ve been told there are fewer than 30 footwear experts in the UK today. However, there are thousands of forensic and police personnel in the UK who are casual users of the the footwear database. For these casual users, analysing footwear can be challenging and their work often needs to be verified by an expert. For that reason, we thought AI may be able to help.

We tasked a second neural network, developed as part of an ongoing partnership with UK-based Bluestar Software, with identifying the make and model of footwear impressions. This AI takes a black and white footwear impression and automatically recognises the shape of component treads. Are the component treads square, triangular or circular? Is there a logo or writing on the shoe impression? Each of these shapes corresponds to a code in a simple classification. It is these codes that are used to search the database. In fact the AI gives a series of suggested codes for the user to verify and identifies areas of ambiguity that need checking.

In one of our experiments, an occasional user was given 100 randomly selected shoe prints to analyse. Across the trial, which we ran several times, the casual user got it right between 22% and 83% of the time. In comparison the AI was between 60% and 91% successful. Footwear experts, however, are right nearly 100% of the time.

One reason why our second neural network was not perfect and didn’t outperform real experts is that shoes vary with wear, making the task more complex. Buy a new pair of shoes and the tread is sharp and clear but after a month or two it becomes less clear. But while the AI couldn’t replace the expert trained to spot these things it did outperform occasional users, suggesting it could help free up time for the expert to focus on more difficult cases.

Systems like this increase the accuracy of footwear evidence and we will probably see it used more often than it is currently – especially in intelligence-led policing that aims to link crimes and reduce the cost of domestic burglaries. In the UK alone they cost on average £5,930 per incident in 2018, which amounts to a total economic cost of £4.1 billion.

AI will never replace the skilled and experienced judgement of a well-trained footwear examiner. But it might help by reducing the burden on those experts and allow them to focus on the difficult cases by helping the casual users to identify the make and model of a footprint more reliably on their own. At the same time, the experts who use this AI will replace the ones who don’t.