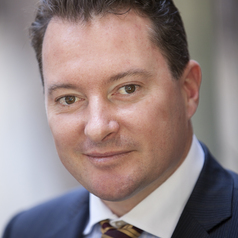 The most telling part of the long-awaited review into the rotten culture of elite Australian cricket is what it doesn’t say. Or more correctly, what it does say, but what the establishment that owns and controls professional cricket won’t let us read.

Even a chunk of the executive summary of the report is redacted, like state secrets from a confidential intelligence dossier. A further 22 other pages in the report also have redacted material, in some parts quite extensive.

First page of the executive summary of the report Australian Cricket: A Matter of Balance. Cricket Australia

There may be other reasons for the dozens of redactions, but it’s hard not to conclude the principle motivation is that some criticisms of Cricket Australia, and of specific individuals, are just too close to the bone. 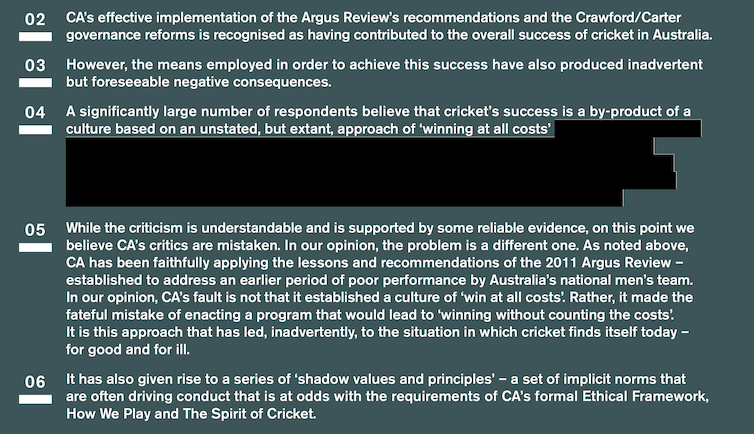 Second page of the executive summary of the report Australian Cricket: A Matter of Balance. Cricket Australia

The redactions are at odds with the “complete transparency” talked about by Cricket Australia chairman David Peever.

They are emblematic of Cricket Australia’s lack of accountability to the game’s most important stakeholders – the cricketing public.

The report stems from the ball-tampering scandal in March 2018, when the leaders of the Australian men’s cricket team were involved in a brazen attempt to cheat during a match with South Africa. Three players, including captain Steve Smith and vice-captain Dave Warner, were given unprecedented 12-month suspensions.

The investigation has spanned the entire organisation (including the member state associations that are essentially the shareholders of Cricket Australia). It has looked at selection processes, values, leadership and the financial arrangements involving players, sponsors and broadcasters.

The report says the leadership of Cricket Australia should accept responsibility for several failures. We don’t know what the first failure is, because it has been redacted. But the second is an “inadvertent (but foreseeable) failure to create and support a culture in which the will-to-win was balanced by an equal commitment to moral courage and ethical restraint”.

The review does – as far as we can tell – save Cricket Australia from blame for promoting a “win at all costs” culture. But it levels a charge almost as serious.

In our opinion, CA’s fault is not that it established a culture of ‘win at all costs’. Rather, it made the fateful mistake of enacting a program that would lead to ‘winning without counting the costs’.

It is this approach that has led, inadvertently, to the situation in which cricket finds itself today – for good and for ill.

A series of unfortunate events

Several significant and controversial decisions were made in the weeks prior to the report’s delayed release. After a “global search”, the board appointed Cricket Australia insider Kevin Roberts to replace retiring chief executive James Sutherland. It then re-appointed long-time board chairman David Peever for a further three-year term.

These decisions suggest Cricket Australia’s highest echelons just aren’t taking responsibility. Doesn’t the buck stop with the chairman and board? How can a significant review finding cultural problems across the entire structure not lead to any meaningful changes in its leadership and governance?

Cricket Australia says it will adopt most of the independent review’s 42 recommendations. It accepts “sin bin” measures for cricketer bad behaviour, that annual cricketer awards take into account sportsmanship and character, establishing an ethics commission to strengthen accountability, and to finally include sledging in an anti-harassment code.

There are, however, two notable rejections.

One is that, “subject to issues of confidentiality (commercial and otherwise)” the board publish the minutes of its meetings, as is done by the Board for Control of Cricket in India. Another cross marked here against transparency.

Operating in a parallel universe

All this points to a critical problem with Cricket Australia’s governance and leadership.

On page 13, the report includes a definition of cricket’s stakeholders: “All parties who hold a stake in the success of CA and Cricket-in-Australia (the general public was not included in the scope for research).”

This seems to sum up Cricket Australia’s attitude perfectly: it pays lip service to the fans, but in practice treats them as a cash cow, not real stakeholders.

Cricket is a sporting monopoly, like other sporting codes. Cricket Australia is a company limited by guarantee, and owned by the state and territory associations. It controls the game as a lucrative business. The general public might love the game, but we have no ownership or direct influence over it.

The only means we might have to effect meaningful reform is by voting with our feet.