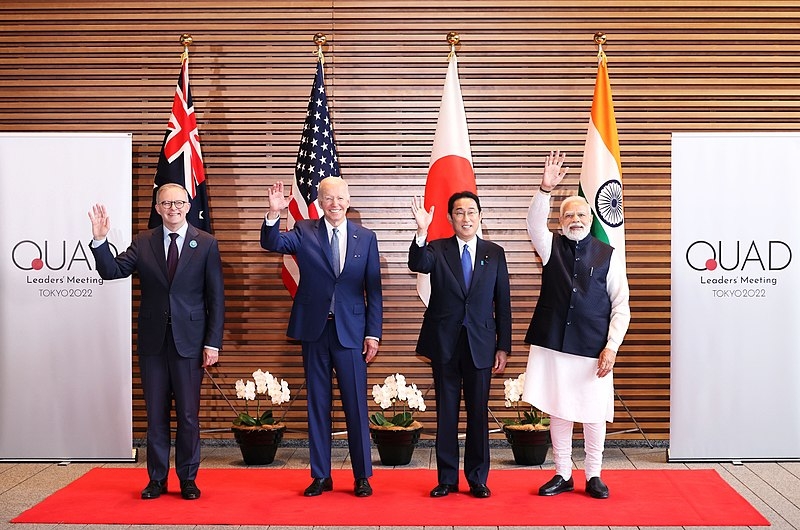 US President Joe Biden this week met with his counterparts in the Quad alliance during his visit to Japan. The meeting in Japan would become the regional grouping’s second in-person summit in less than a year.

Biden met with his counterparts in the Quad grouping Tuesday in Tokyo in what would be the group’s second in-person summit. The ongoing war in Ukraine was on the agenda, as well as the increasing cooperation in Asia.

Prior to the meeting, US National Security Adviser Jake Sullivan said “food security” was also on the agenda for the meeting between the leaders of the US, India, Japan, and Australia.

The US leader traveled to Asia for the first time as president, first visiting South Korea and then Japan. Biden launched his new Asia-Pacific Initiative, the Indo-Pacific Economic Framework, with 13 countries co-signing, including India, Japan, and South Korea.

The key issue of Taiwan was also brought up during the US leader’s joint conference with Japanese Prime Minister Fumio Kishida, where Biden said the US was ready to defend the island nation militarily should China decide to invade. Kishida gave a less-direct answer to the same situation, saying that the Indo-Pacific should never tolerate any attempt to unilaterally “change the status quo by force.”

Kishida also stressed the importance of peace and stability in the Taiwan Strait.

In the meeting with his Quad counterparts, Biden also welcomed Australia’s new Prime Minister Anthony Albanese, who succeeds Scott Morrison, who was sworn into office after the elections shortly before traveling to Japan for the summit.

In other related news, Biden renewed the Democratic push for gun control following the latest school shooting that took place in Uvalde, Texas. A lone gunman killed 19 children and two adults in the district’s elementary school.

In a somber address harkening to the 2012 Sandy Hook Elementary School shooting, Biden questioned when is gun control going to become a priority. The US leader pinned the blame on the country’s gun industry for the stalled progress on gun safety measures in Congress.

The Uvalde massacre also comes 10 days after a mass shooting in Buffalo, New York, where 10 people were killed.