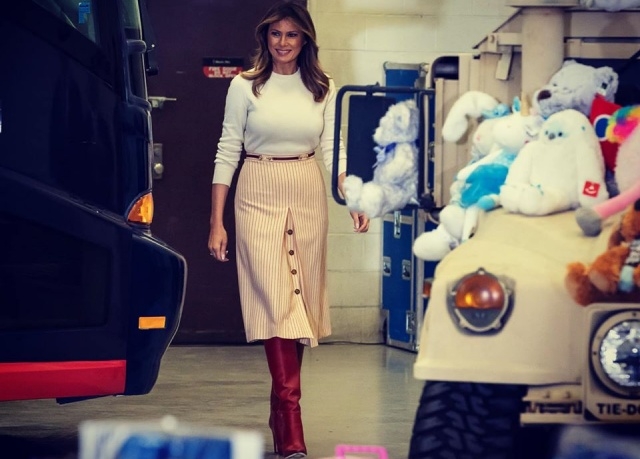 Melania Trump is currently the First Lady in the U.S. and with her position, she is bound to have many formal engagements and public appearances that may require her to give a speech. Delivering speeches is not easy especially in the world of politics so how does the FLOTUS do it?

As per Express, the secret to Melania Trump’s regal speeches has to do something with Queen Elizabeth. The publication reported that body language expert, Judi James, suggests that Donald Trump’s wife has copied a technique from the Queen and she adapted this to look more powerful when she speaks.

"Donald Trump has always spoken openly about his admiration for our Queen,” James told the publication. "He and Melania experienced the traditions of royal body language up-close on their visits to the UK. It would be easy to imagine that Melania might have used her as a role model in terms of successful, high-status leadership, as she performed her own versions of ‘The Queen’s Speech.’”

The body language expert explained that she can see Melania Trump has taken notes from the British monarch when she delivers her speech. Judi James made the conclusion that the FLOTUS copied the Quee’s style after analyzing the two women’s speeches and she found huge similarities.

It was further stated that the model-turned First Lady was able to observe Queen Elizabeth up-close when she and husband Donald Trump visited the U.K. last year for the NATO summit. It was said that Melania Trump then took inspiration from the Queen and the Royal Family who have exuded a regal vibe while also showing dominance at the same time.

Judi James said that Melania Trump developed a technique in delivering her speeches based on the techniques she picked up from Queen Elizabeth. She said that the FLOTUS is imitating the Queen’s way of talking which is using the maternal tone to sound kind but tough and powerful. Her movements also show similarities with the Queen’s.

Today, Melania Trump is getting her messages across by talking in a straightforward manner and choosing a more modern style to speak. In this way, James said that the First Lady is now saying her speeches powerfully but with kind emotions wherever she goes.