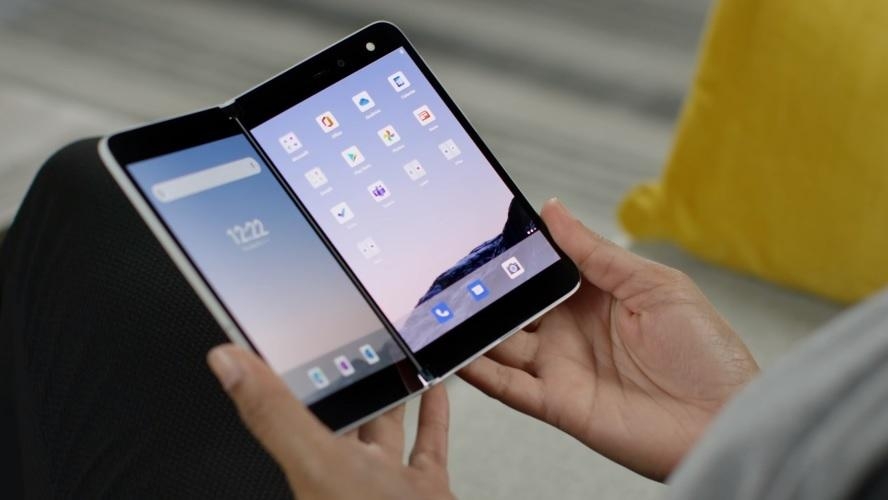 People who are big fans of folding devices might already have their first look at the next Microsoft Surface Duo. At first glance, several changes can be easily spotted, but the most prominent design tweak has to be the new, massive camera bump.

A video originally posted in June from a relatively new YouTube channel called Tech Rat has garnered the attention of fans and several publications this week. The brief video titled “Microsoft Surface Duo 2 LEAKED PHOTOS – 2021” claims to provide the first look at Microsoft’s second take on the dual-display device. Considering the limited details on the source’s accuracy record, fans are right to be skeptical of the leaks. However, note that Windows Central has since reported that the photos are “legitimate.”

Right at the beginning of the video, fans will spot the massive camera bump on the back of one of the displays, which contains three unidentified sensors. The mere addition of rear-facing cameras is already an upgrade. The 2020 Microsoft Surface Duo only shipped with a single camera module. It served the dual purpose of being the main camera and selfie camera despite only having 11MP, so it was not surprising that it was one of the most criticized aspects of the device.

Overall, the form factor of the rumored Microsoft Surface Duo 2 looks similar to its predecessor with just a few design updates. The edges of the back of the device look like it has some curves, and its corners also seem rounder. The attachment mechanism of the two displays appears to be unchanged, with two visible hinges placed on the top and at the bottom.

The source said Microsoft Surface Duo 2 will pack slightly bigger displays with thinner bezels than the first model. But it was hard to tell how noticeable these changes would be since the leaks seem to feature an early mock-up model, so the screens do not actually light up.

Microsoft is also expected to address other criticisms on the first Surface Duo as the second-gen device is rumored to ship with NFC support and 5G network. The Microsoft Surface Duo 2 will reportedly launch between September and October.