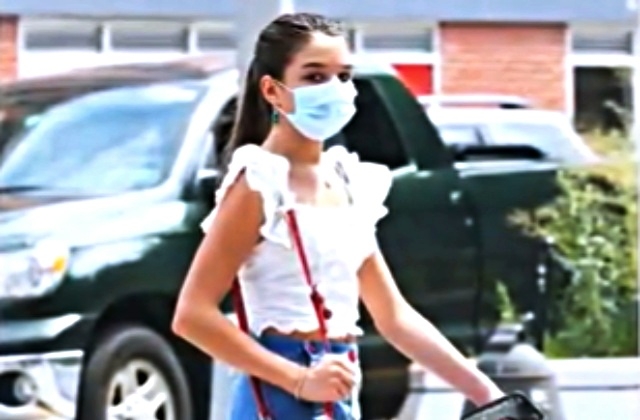 Suri Cruise was spotted with her mother Katie Holmes this week. The mother and daughter duo rented Citi Bikes and bike their way around the town.

The bike date in New York

The “Dawson’s Creek” actress’ new boyfriend Emilio Vitolo Jr. was also seen later riding the bike. There are photos of Suri Cruise and her mother while riding the bikes and there are also snaps of Katie Holmes biking with her beau.

It is not clear if Suri also biked together with her mom and Emilio but FN News reported that the trio rode the bikes together. If that was the case, this is the first time that Tom Cruise’s daughter had an interaction in public with her mom’s boyfriend.

Suri Cruise seems to be twinning with her mom as they wore an almost identical ensemble of white top and black pants. Their looks were completed with white sneakers and face masks.

The teener wore a ruffled top while Katie wore a plain shirt topped with a double-breasted checkered coat.

Katie, Suri and Emilio's day out

When Katie Holmes was seen with Emilio Vitolo Jr., they rode the bike until the sunset. Unlike what was reported by FN News, The Hollywood Life suggested that Suri Cruise went home by the time her mom and her boyfriend met up for a bike ride in the early evening. It was said that it only appeared that Suri was with them as well because the actress did not go home to change before meeting up with her beau.

If Suri and Emilio did meet on this bike ride activity in New York, then it should debunk the rumors that the teener hates the chef and restaurateur. It was previously reported that she is not in favor of Emilio because she thinks he would only hurt her mom.

As per Woman’s Day, Suri Cruise was really embarrassed and worried sick for her mom. This is because Emilio may break her heart again soon.

“She’s totally red-faced about her mom carrying on like a teenager in public,” the insider revealed to the magazine. “It never really happened before so this is a first for her, and like any kid her age, she’s not coping.”