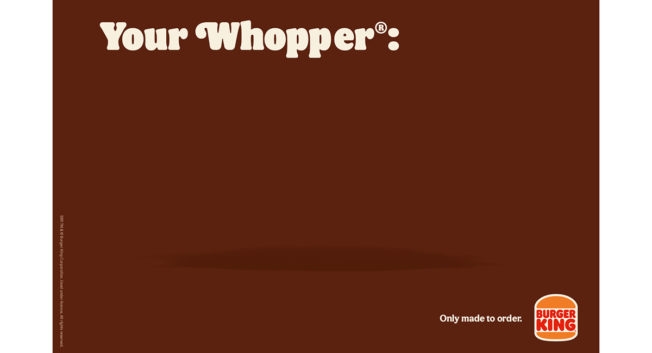 The idea is that it can’t show any of the three sandwiches because it hasn’t been prepared yet.

Burger King released print and outdoor ads in Germany promoting the Whopper, King’s Beef, and plant-based Long Chicken with no product shots beneath the names to promote the fact that its sandwiches are freshly made when ordered.

The idea is that it can’t show any of the three sandwiches because it hasn’t been prepared yet.

Burger King’s lead ad agency in Germany, Grabarz & Partner, created the “Not Made Yet” campaign.

In 2020, Burger King released its Moldy Whopper ad, its most notorious way of advertising the freshness of its food, where it showed a Whopper decaying and being engulfed in mold.

The global campaign, created by Ingo, David Miami, and Publicis, highlighted its commitment to dropping all artificial preservatives.