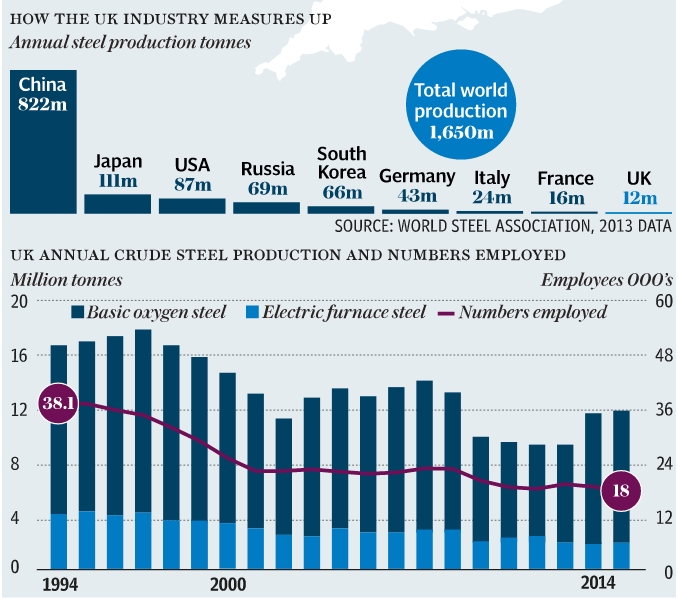 Tata Steel on Wednesday put its British business up for sale, adding that EU rules restricting state aid were to blame for its decision – a claim which was seized on by campaigners for Brexit. The company's decision to sell the operation could cost 15,000 jobs inside the company but the thinktank IPPR said that up to 40,000 could be affected more widely across the supply chain. The risk of losing thousands of industrial jobs in an economically deprived region will put pressure on David Cameron’s government.

Global steel price has plummeted over the past year, from $500 (£330) a tonne to about $280 by September 2015, a 45 per cent drop in just 12 months on account of oversupply. Steel exports from China have been growing as its economy slows. The flood of excess cheap Chinese steel has had a devastating effect on UK steel manufacturers.

UK steelmakers condemn the British government for failing to introduce protectionist measures against cheap Chinese imports. The government stresses the need to work within the EU to come up with a plan to take on cheap Chinese steel. EU imposes a tariff of just 24 per cent on Chinese steel imports, compared to the 266 per cent levied in the US. Any attempts by the Government to nationalise the industry could also be blocked by harsh EU rules on state aid - a point that pro-EU ministers have admitted.

The issue now looks set to enter the debate about Britain’s ongoing membership of the EU. The situation has been seized on by Brexit campaigners with Labour MP Kate Hoey saying EU “regulations on energy production are killing our steel industry”. But Remain supporters say Britain was the country holding back the EU from taking action against China.

UK business secretary, Sajid Javid, who has backed the 'Remain' campaign despite previously harbouring major doubts over the EU, said on Wednesday night that Europe should do more to ensure “speedier action” to help save British steel.

Simon Boyd, a director at Reidsteel, Britain’s largest steel construction company and a Brexit supporter, said: “While we remain in the EU, the UK government we elect can do little to tackle the dumping of cheap steel or unfair state aid rules.”

GBP/USD printed a session high of 1.4420 as Euro’s move to fresh 5-month high is keeping USD under pressure across the board. EUR/GBP down from session highs to currently trade at 0.7890 levels at 1115 GMT.