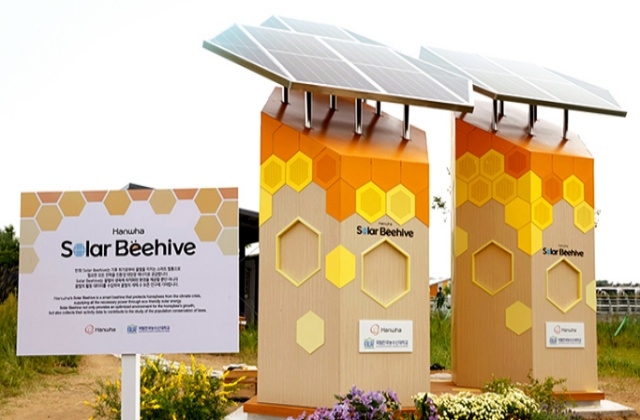 Hanhwa Group, a large South Korean conglomerate, has built a new technology to save the bees. It has created a solar beehive that uses solar energy to save and safeguard the winged insects that are becoming fewer in number.

Hanwha’s solar beehive is the first of its kind in the country, and through this technology, bees are being monitored with the use of solar energy. The company unveiled the beehive to celebrate the United Nation’s World Bee Day, which was on Friday, May 20.

The solar beehive has been described as a beehive designed with a photovoltaic low-carbon solar beehive that uses electricity generated from solar energy. As per The Korea Times, Hanhwa Group set up the first solar beehive at the Korea National University of Agriculture and Fisheries (KNUAF).

Currently, the beehive is still under the company’s pilot program. The officials said that 40,000 bees on this beehive will help pollinate the fruit trees on the campus as well as the vegetation in the forest area that is close to the campus.

Hanhwa’s solar beehive program will be collecting data on the bees’ activities and population growth. These data will then be utilized to teach the students at KNUAF and for conducting further research on conserving bees. Hanhwa Group signed a memorandum of understanding (MOU) with the KNUAF for this initiative.

In any case, it was mentioned that as the damaging effects of the climate change crisis become more evident around the world bee populations, pollinators are one of the most important parts of nature that have been affected. Pollinators like the bees have been declining at a fast rate, so Hanhwa Group is using this project to help save them.

The company is aiming to increase bee populations by keeping a stable environment for their growth while also promoting the importance of conserving biodiversity. With this goal for sustainability, the Hanhwa group is addressing the adverse effects of climate change in its own way by encouraging bee pollination that helps with the growth of trees, plants, and flowers.

“The Solar Beehive will effectively increase the bee population and preserve the species, as it can monitor the growth of the bees in real time and detect diseases and pests immediately,” Hye Kyung Kim, a professor of the Department of Industrial Entomology at the KNUAF, said in a press release.