Burger King is the unhealthiest fast-food chain in the US, dietitian says

Scientists find microplastics in blood in 80% of humans 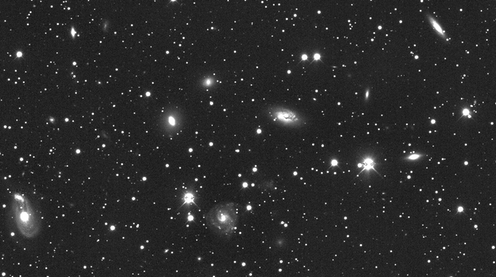 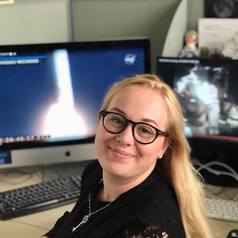 This article is part of a series explaining how readers can learn the skills to take part in activities that academics love doing as part of their work.

By far my favourite thing about my job as an astronomer is those rare moments when I get to see beautiful distant galaxies, whose light left them millions to billions of years ago. It’s a combination of pure awe and scientific curiosity that excites me about “galaxy hunting”.

In astronomy today, much of our work is handling enormous amounts of data by writing and running programs to work with images of the sky. A downside to this is that we don’t always have that “hands-on” experience of looking at every square inch of the universe while we study it. I’m going to show you, though, how I get my fix of wonder by looking at galaxies that only a select few people will ever have seen, until now.

In just our observable universe we estimate there are over 2 trillion galaxies!

Galaxies at your fingertips

Only a few decades ago astronomers had to tediously examine photographic plates after a long, cold and lonely night of observing. In the 21st century we have access to information any time, anywhere via the internet.

Automatic telescopes and surveys now provide us with so much data we require machines to help us analyse it. In some cases human eyes will only ever look at what the computers have deemed is interesting! Massive amounts of data are hosted online, just waiting to be admired, for free.

Go online for a universe atlas

Aladin Lite is one of the greatest online tools available to look at our universe through the eyes of many different telescopes. Here we can scan the entire sky for hidden galaxies, and even decipher information about their stellar populations and evolution.

Let’s start our universal tour by searching for one of the most visually stunning galaxies out there, the Cartwheel Galaxy. In the Aladin interface, you can search for both the popular name of an object (like “cartwheel galaxy”) or known co-ordinates. The location will be centred in the interface. 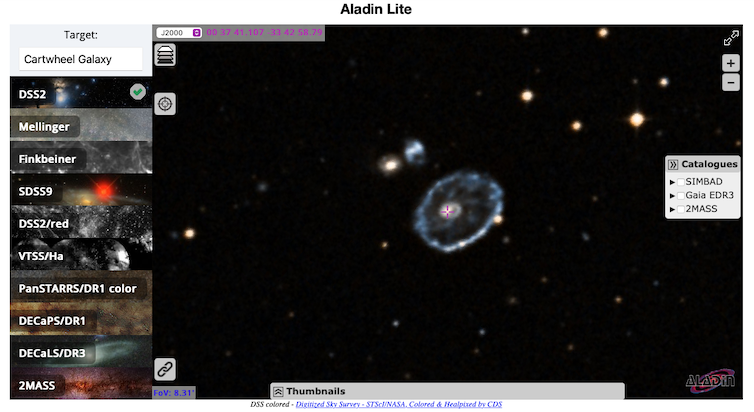 Online view in Aladin Lite of the Cartwheel Galaxy, a lenticular/ring galaxy 500 million light years away from Earth discovered in 1941 by iconic astronomer Fritz Zwicky.

The first image of the Cartwheel Galaxy we see is from optical imaging by the Digitised Sky Survey. The colours we see represent different filters from this telescope. However, these are fairly representative of what the galaxy would look like with our own eyes.

In this galaxy, the outer ring appears to be more blue then the centre red section. This might hint at star formation and stellar activity happening in the outer ring, but less so in the centre.

To confirm our suspicions of star formation we can select to look at data from different surveys, in different wavelengths. When young stars are forming, vast amounts of UV radiation are emitted. By changing the survey to GALEXGR6/AIS, we are now looking at only UV wavelengths, and what a difference that makes! 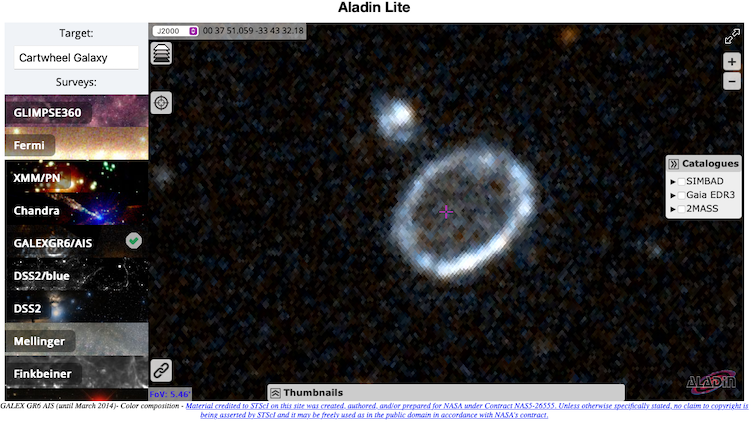 Online view in Aladin Lite of the Cartwheel Galaxy in GALEX UV wavelengths.

The whole centre section of the galaxy seems to “disappear” from our image. This suggests that section is likely home to older stars, with less active stellar nurseries.

Aladin is home to 20 different surveys. They provide imaging of the sky from optical, UV, infrared, X and gamma rays.

When I am wandering the universe looking for interesting galaxies here, I generally start out in optical and find ones that look interesting to me. I then use the different surveys to see how the images change when looking at specific wavelengths.

Now you’ve had a crash course in galaxy hunting, let the game begin! You can spend hours exploring the incredible images and finding interesting-looking galaxies. I recommend looking at images from DECalS/DR3 for the highest resolution and detail when zooming further in.

The best method is to just drag the sky atlas around. If you find something interesting, you can find out any information we have on it by selecting the target icon and clicking on the object.

To help you on your galactic expedition here are my favorite finds of the different types of objects you might see. 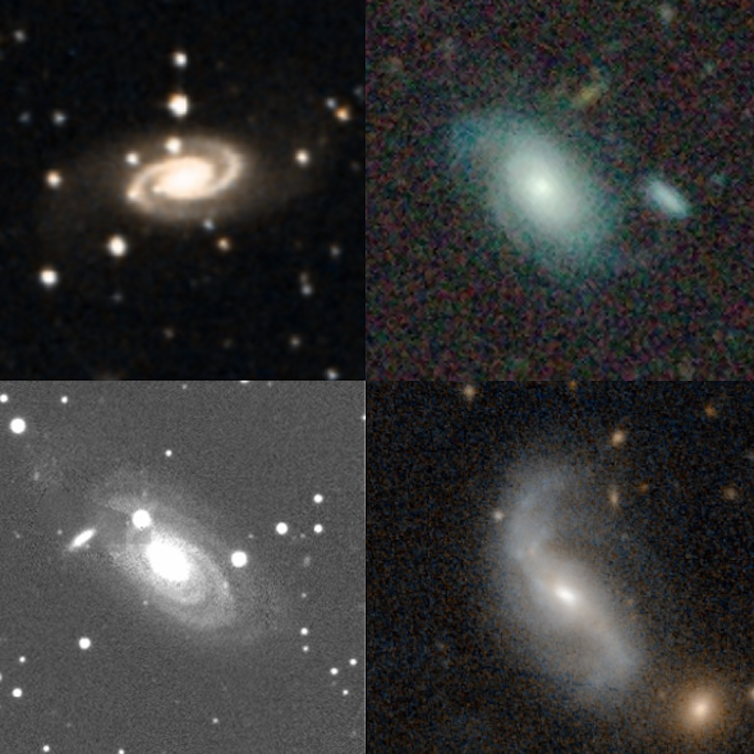 Examples of spiral galaxies found using Aladin online. Spirals are the most iconic galaxy shape and include many of the brightest galaxies in the nearby universe, like the Andromeda Galaxy.

Spiral galaxies typically have a central rotating disc with large spiral “arms” curving out from the denser central regions. They are incredibly beautiful. Our own Milky Way is a spiral galaxy.

Examples of elliptical galaxies. This type of galaxy has an approximately ellipsoidal shape and a smooth, nearly featureless image.

Elliptical galaxies are largely featureless and less “flat” then spirals, with stars occupying almost a 3D ellipse at times. These type of galaxies tend to have older stars and less active star-forming regions compared to spiral galaxies.

Examples of lenticular galaxies. These are a type of galaxy intermediate between elliptical and a spiral galaxies.

Lenticular galaxies appear like cosmic pancakes, fairly flat and featureless in the night sky. These galaxies can be thought of as the “in between” of spiral and elliptical galaxies. The majority of star formation has stopped but lenticular galaxies can still have significant amounts of dust in them.

There are also other amazing types of galaxies, including mergers and lenses, which are just waiting for you to find them. I’d love to see what amazing things you find over on Twitter at @sarawebbscience.