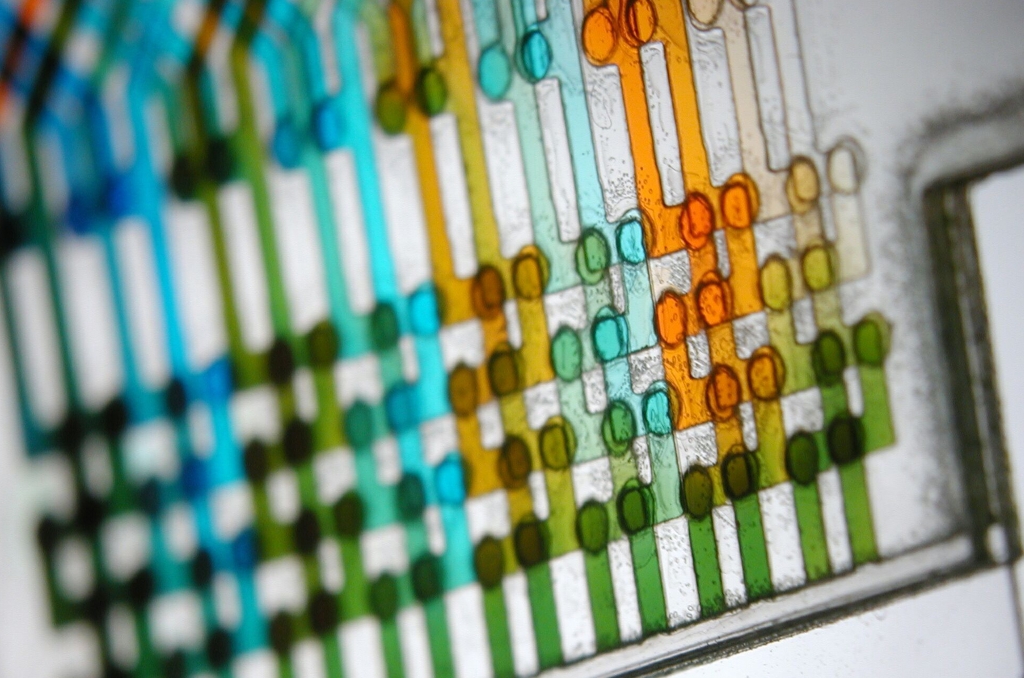 Anything that moves or processes tiny amounts of fluid is a microfluidic device. Chris Neils/Albert Folch, CC BY-ND

When you think of micro- or nanotechnology, you likely think of small electronics like your phone, a tiny robot or a microchip. But COVID-19 tests – which have proven to be central to controlling the pandemic – are also a form of miniaturized technology. Many COVID-19 tests can give results within hours without the need to send a sample to a lab, and most of these tests use an approach called microfluidics.

I am a professor of bioengineering and work with microfluidics for my research. Everything from pregnancy tests to glucose strips to inkjet printers to genetic tests rely on microfluidics. This technology, unbeknownst to many people, is everywhere and critical to many of the things that make the modern world go round.

Microfluidic systems are any device that process minuscule amounts of liquids. The fluids travel through channels thinner than a hair, and tiny valves can turn the flow on and off. These channels are made of materials such as glass, polymers, paper or gels. One way to move fluids is with a mechanical pump; another way is to use the surface charges of certain materials; and yet another is to use the so-called capillary action – more commonly known as wicking. Wicking is the process by which the energy stored within the liquid propels the liquid through narrow spaces. 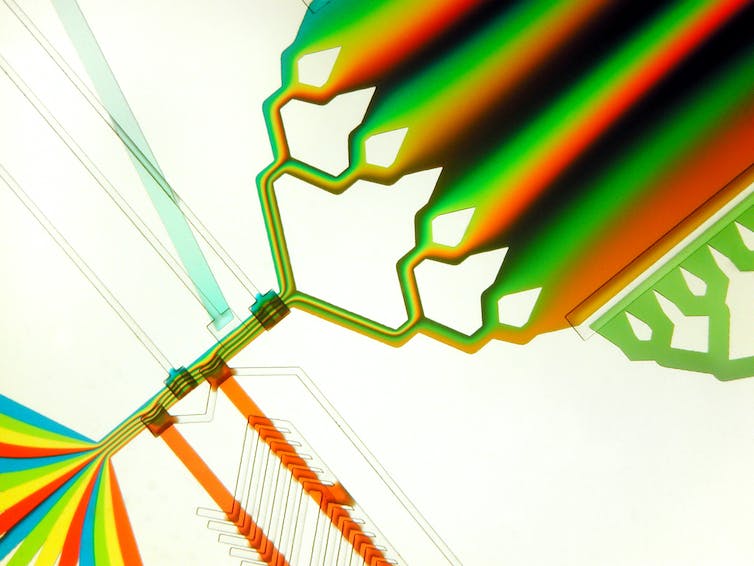 The colored liquids enter from the bottom left, but due to laminar flow, remain relatively unmixed even though they pass through one single channel and exit on the top right. Greg Cooksey and Albert Folch

At small scales, fluids behave in unintuitive ways. Picture not the turbulent, chaotic flow coming out of a garden hose or your showerhead. Instead, in the constricted volumes of a microchannel, flows are eerily stable. Fluids move down the channel in organized parallel streams – called laminar flow. Laminar flow is one of the great wonders of microfluidic systems. The fluids and particles in laminar flow follow paths that are mathematically predictable – a necessity for precision engineering and medical device design.

These processes – inspiring to researchers – have existed in nature for eons. Plants transport nutrients from their roots up to the highest branches using capillarity, the inspiration for microfluidic circuits that are autonomously powered. Mimicking the physical properties of raindrops, chemists have designed devices that break a sample into millions of droplets and analyze them at dizzying speeds. Each droplet is essentially a tiny chemical laboratory that allows chemists to study the evolution of biomolecules and perform ultra-fast genetic analysis, among other things.

And finally, every corner of the human body is microfluidic. We could not be born or function without intricate blood capillaries that bring food, oxygen and signaling molecules to every cell. 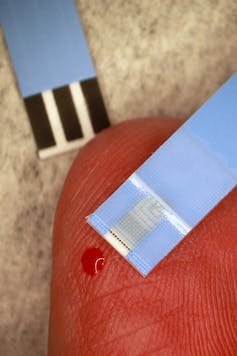 The benefits of tiny tech

As the components get smaller, devices can rely on the strange properties of liquids at tiny scales, can operate faster and more efficiently and are cheaper to manufacture. The microfluidics revolution has been silently piggybacking on its electronic counterpart.

Another major benefit of microfluidic devices is that they require only very small amounts of liquid and therefore can be tiny in size. NASA has been considering microfluidic analyzers for its Mars rovers for a long time. The analysis of precious fluids – such as human blood – also benefits from the ability to use small samples. For example, glucose meters are microfluidic instruments that require only a drop of blood to measure a diabetic’s blood sugar. 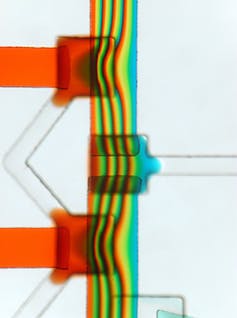 Three microvalves in a microchannel. The first and the third valve, leading to the orange-filled channel, are closed. The valve in the middle is open. Greg Cooksey and Albert Folch

Microfluidics in tech, biology and medicine

Chances are that you use microfluidics quite often in your life. Inkjet printers shoot tiny ink droplets. 3D printers squeeze out molten polymer through a microfluidic nozzle. The ink in fountain pens and ballpoint pens flows via microfluidic principles. Nebulizers for asthma patients spray a mist of microscopic drug droplets. A pregnancy test relies on urine flow within a microfluidic paper strip.

In scientific research, microfluidics can direct drugs, nutrients or any fluid to very specific parts of organisms to more precisely simulate biological processes.

For example, researchers have trapped worms in channels and stimulated them with odors to learn about neural circuits. Another team directed nutrients toward specific areas of a plant root to observe different reactions to growth chemicals. Other groups have devised microfluidic traps that physically capture rare tumor cells from blood. Multitudes of microfluidic genetic chips provide the power to rapidly sequence the human genome and make personalized DNA tests such as 23andMe a reality. None of this would have been possible without microfluidics. 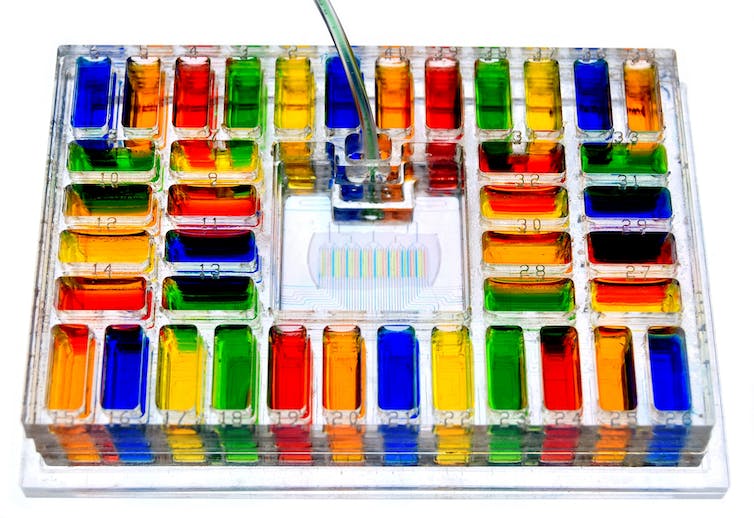 This device is a ‘tumor-on-a-chip,’ and each well contains a different drug that is pumped to the center, where the tumor samples are placed. Adan Rodriguez and Albert Folch, CC BY-ND

The future of microfluidics

Microfluidics will be critical for ushering medicine into a new, fast-paced, affordable era. Wearable devices that measure substances in sweat for exercise monitoring and implantable devices that locally deliver cancer drugs to a patient’s tumor are some of the next frontiers of biomedical microfluidics.

Researchers are developing complex, fascinating microfluidic systems called organs-on-a-chip that aim to simulate various aspects of human physiology. In my own lab and other labs across the world, teams are developing tumor-on-a-chip platforms to test cancer drugs more efficiently. These patient avatars will enable scientists to test new treatments in a way that does not entail the cost, suffering and ethical issues associated with testing in animals or in humans. In my lab, we first dissect a tumor biopsy from a cancer patient into thousands of microscopic regular pieces that we keep alive. By virtue of their small size, we can use microfluidics to trap the tiny tumor pieces in multiple wells, one well per drug. These samples retain the appropriate cellular environment of the tumor which will allow us to more accurately predict how a drug will work for a specific person.

Imagine going to the doctor, getting a biopsy extracted, and in less than a week, by using our microfluidic device, the doctor can figure out which drug cocktail works best to remove your tumor. That is still in the future, but what we do know is that the future will be microfluidic.

Albert Folch receives funding from the National Institutes of Health and other agencies to fund his microfluidics research and he is the co-founder of OncoFluidics, a startup that aims to to lower the cost of drug testing by using microfluidics.