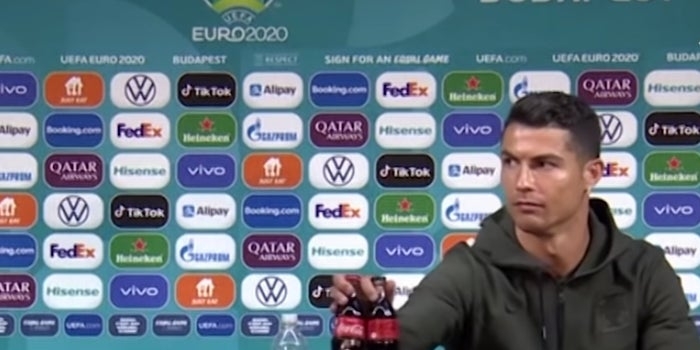 Ronaldo moved out of the view of the cameras the two bottles of Coca-Cola in front of him.

Coca-Cola's market value dropped by $4 billion, from $242 billion to $238 billion after soccer superstar Cristiano Ronaldo's gesture in a press conference of rejecting the carbonated drink in favor of water.

During the press conference, where the 36-year-old Ronaldo talked about his Portugal side's chances in their Euro 2020 opening match, he moved out of the view of the cameras the two bottles of Coca-Cola in front of him.

He then raised a bottle of water saying "agua."

Ronaldo has long been known for his strict diet and ultra-healthy lifestyle.

Players were offered either Coca-Cola, Coca-Cola Zero Sugar, or water before each press conference. But everyone was "entitled to their drink preferences," said a Euro 2020 spokesperson.

The organization also lauded Ronaldo for showing his disdain for a marketing attempt to link him to Coca-Cola, one of the sponsors of Euro 2020.